Venkatesh's Narappa is a Telugu film directed by Srikanth Addala. It is the remake of Dhanush's Asuran which is based on the novel Vekkai by Poomani. Have a look at the reviews here. 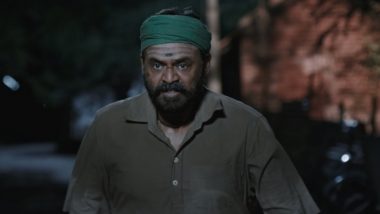 Narappa starring Venkatesh and Priyamani in lead roles released on Amazon Prime Video on July 20. For the uninitiated, the flick is the official remake of Dhanush’s Tamil movie Asuran. Helmed by Srikanth Addala, Narappa has been one of the most awaited movies of the year. The story of the film is set in Andhra Pradesh and shows an intriguing story of a farmer and his family and the obstacles they face. But is Narappa, worth a watch? or can you skip it? Well, reviews are out, and let us check out what the critics have to say. Narappa Movie Review: Venkatesh and Priyamani’s Faithful Asuran Remake Is a Victim of Comparison Trap (LatestLY Exclusive).

The Indian Express: " Narappa had to make great sacrifices such as losing all his family members to hate so that his son could walk the streets in slippers without attracting a punishment for it. Asuran wasn’t a work of art and neither is Narappa. But, it is honest and bold, and will always remain hard-hitting, powerful and timely."

Hindustan Times: "Asuran, which had revenge as its core theme, touched upon themes like class divide, caste and power politics. Narappa plays it safe by simply projecting it as a film where the clash between the haves and have nots without even the mention of caste politics. The film also talks about how land is a symbol of identity." Narappa Trailer: Venkatesh Will Do Anything To Save His Son In This Amazon Prime Original Drama On Casteism (Watch Video).

Times of India: "Narappa is familiar territory for those who have seen Asuran. It might not be as smooth as the original due to some of the performances by the supporting cast, but it manages to get the message across loud and clear."

Gulte: "Another disadvantage that Narappa bags is that Asuran is also available on OTT and most of the Telugu audience might have already watched it. Though Venkatesh is a terrific actor, the rustic role and screen presence of Dhanush remains unmatched. So the viewers who have watched both films may find the original Asuran as a better one."

India Today: "Both Asuran and Narappa impart a message that is important in society. The two films talk about how education can make you rational and help in overcoming the caste barrier. For those who haven’t watched Asuran, Narappa will hit you hard and make you learn a thing or two about the oppressed."

Well, going by the above reviews all we can say is that Narappa can be watched if you have not watched Asuran. But if you have seen Dhanush's film, you might get disappointed with Narappa. Stay tuned!

(The above story first appeared on LatestLY on Jul 20, 2021 03:56 PM IST. For more news and updates on politics, world, sports, entertainment and lifestyle, log on to our website latestly.com).