Mani Ratnam co-wrote Ponniyin Selvan: 1 with Elango Kumaravel and B Jeyamohan, a film produced under the banners of Madras Talkies and Lyca Productions. 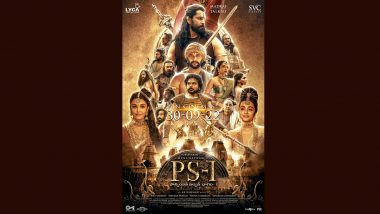 Ponniyin Selvan: 1 aka PS1 is one of the most anticipated movies of the year. The film helmed by ace filmmaker Mani Ratnam features a stellar star cast. The first part of this upcoming film is adaptation of Kalki Krishnamurthy’s popular novel. PS1 has already grabbed audiences attention and one just cannot wait to watch the epic period action drama on the big screens. Ponniyin Selvan: Suhasini Maniratnam Calls Out Twitter Handle Who Put Out 'First Review' of Vikram, Aishwarya Rai Bachchan's Film.

Mani Ratnam co-wrote Ponniyin Selvan: 1 with Elango Kumaravel and B Jeyamohan. PS1 is produced under the banners of Madras Talkies and Lyca Productions. Take a look at the key details of the film before its theatrical release.

Plot –  The film will showcase how Vandiyathevan, warrior prince of Vaanar Clan, sets out to cross the Chola land to deliver a message from Aditha Karikalan, the crown prince and the commander of Northern troops in Sundara Chola’s Reign and Kundavai’s attempts to establish political peace in the land.

Watch The Trailer Of Ponniyin Selvan: 1 Below:

Release Date – PS1 is set to be released in theatres in both standard and IMAX format on September 30.

Review – The review for PS1 is out. Click here, to read our review of the Mani Ratnam film!

(The above story first appeared on LatestLY on Sep 29, 2022 03:51 PM IST. For more news and updates on politics, world, sports, entertainment and lifestyle, log on to our website latestly.com).