Puneeth Rajkumar Dies at 46: Video of Late Kannada Star Dancing With Shiva Rajkumar and Yash on Bhajarangi 2 Song Is Going Viral for This Heartbreaking Reason

Heartbreakingly the last tweet that Puneeth put merely hours before his passing away was also to promote his elder brother's film, which was to release today. Bhajarangi 2 starred Shiva Rajkumar and Bhavana Menon in the lead. 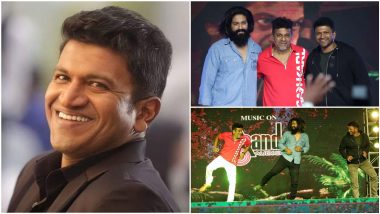 In a heartbreaking news to all Kannada movie lovers, superstar Puneeth Rajkumar passed away on October 29 after suffering from a cardiac arrest. He was just 46. As the news of his demise goes viral, fans are sharing their fave videos of the actor. Among those the one going the most viral is from an event to promote Puneeth's elder brother Shiva Rajkumar's film Bhajarangi 2. Puneeth Rajkumar Passes Away at 46 Due to Cardiac Arrest in Bengaluru - Reports.

The event was held on October 27, and was marked for the pre-release promotions of the movie. Puneeth Rajkumar was one of the special guests for the occasion and so was Yash, the superstar known for his leading role in the KGF franchise. The trio of Shiv, Puneeth and Yash regaled the fans present in the venue, showered each other with praises, and then as a special treat to all those present, performed to the popular title track of Bhajarangi 2, titled "Bhajare Bhajare Bhajarangi".

It is this dance moment that fans are making it go viral, as the star was still quite energetic just a couple of days back. And it also was the star's last stage performance. Puneeth Rajkumar No More: Karnataka Government Shuts Down All Theatres After the Demise of Kannada Actor Due to Heart Attack.

Heartbreakingly the last tweet that Puneeth put merely hours before his passing away was also to promote his elder brother's film, which was to release today.

(The above story first appeared on LatestLY on Oct 29, 2021 03:55 PM IST. For more news and updates on politics, world, sports, entertainment and lifestyle, log on to our website latestly.com).