As per unverified reports, Kannada film star Puneeth Rajkumar has passed away after suffering cardiac arrest in Bengaluru on October 29. He was 46. 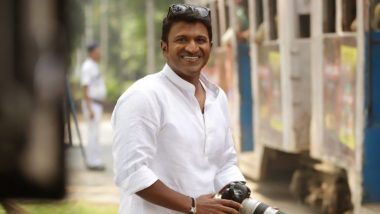 Kannada star Puneeth Rajkumar is no more. As per unverified reports, the superstar down South breathed his last on October 29 after suffering a massive cardiac arrest. He was 46. Reportedly, the actor was rushed to a private hospital in Bengaluru and was getting treated in the Intensive Care Unit (ICU). The report further also elaborates that Karnataka Chief Minister Basavaraj S Bommai was at the hospital to check on the star. It is said that he suffered a heart attack while working out in the gym. Puneeth Rajkumar Dies of Heart Attack; Lakshmi Manchu, Kubbra Sait and Other Celebs Mourn the Loss of Kannada’s Legendary Star.

As soon as this news was out online, many celebs mourned the demise of Puneeth and were surprised to know that he is no more. The news about Puneeth Rajkumar's death was confirmed by Sathish, the personal manager of the actor.  Puneeth Rajkumar No More: Karnataka Government Shuts Down All Theatres After the Demise of Kannada Actor Due to Heart Attack.

Puneeth was a huge name down South and was last seen in Yuvarathnaa, directed by Santhosh Ananddram. On the professional front, he had recently wrapped shooting for Chethan Kumar's James, and was all set to start shooting for his next titled Dvitva.

Puneeth was not only an actor but also a playback singer, television presenter, and producer by profession. In a career spanning two decades, the legendary actor was fondly called Appu by his fans and is known for films like Vasantha Geetha (1980), Bhagyavantha (1981), Chalisuva Modagalu (1982) among others. May his soul RIP.

(The above story first appeared on LatestLY on Oct 29, 2021 02:37 PM IST. For more news and updates on politics, world, sports, entertainment and lifestyle, log on to our website latestly.com).