Rajinikanth Is Thalaivar, Pawan Kalyan Is Power Star, Know the Importance of Nicknames for a South Superstar

Rajinikanth is Thalaivar. Kamal Haasan, through his heydays as a superstar, has been Ulaganayagan to fans. Vijay has been hailed as Thalapathy while Ajith is Thala. Chiranjeevi is Mega Star to Telugu fans while Mahesh Babu is Prince. Here's looking at the new set of monikers, among Southern stars. 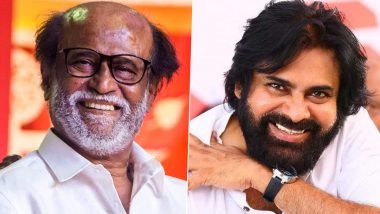 Rajinikanth is Thalaivar. Kamal Haasan, through his heydays as a superstar, has been Ulaganayagan to fans. Vijay has been hailed as Thalapathy while Ajith is Thala. Chiranjeevi is Mega Star to Telugu fans while Mahesh Babu is Prince, Pawan Kalyan is Power Star, and Ravi Teja has been Mass Maharaja for well over a decade. Mohanlal is widely known to fans of Malayalam cinema as Lalettan while Mammootty is Mammookka. One: Mammootty’s Political Thriller To Release in Theatres on March 26!

Superstar sobriquet have existed in the South for ages, and the new generation screen icons have followed suit. Having a moniker helps -- for one, it endears the star to his/her fans and, importantly, also conveys the particular image he or she might want to project as a public icon. From Ram Charan’s RRR to Mohanlal’s Marakkar: Lion of The Arabian Sea, South Superstars Go Retro With Action Films.

So, while most actors get sobriquets from fans that toast them as the best (most monikers roughly translate to words like leader, hero, chief etc), a few stars have also found the apt title from films they have worked in. Vikram, for instance, became Chiyaan, after his hugely popular character's name in the 1999 blockbuster Sethu. Kannada star Sudeep has been Kiccha to fans since he essayed the title role in the 2003 superhit of that name.

In the past, too, iconic actors down South were given endearing names by their fans. MG Ramachandran was called Makkal Thilagam during his acting days, Jayalalithaa was referred to as Puratchi Thalaivi. Sivaji Ganesan was called Nadigar Thilagam, while Rajkumar was Annavru. These are just a few instances over the decades in southern film industries, where filmstars are deified as nothing short of deities. Here's looking at the new set of monikers, among Southern stars:

He was earlier called Stylish Star, and has only recently been named Icon Star (the extra 'a' is perhaps for added impact). The name came about recently when the first look of his upcoming film Pushpa was launched a few days ago. The film's director Sukumar announced at the event: "Everyone has known him as the Stylish Star. From now on, he will be Icon Staar". So much so, the teaser of the film introduces Arjun as Icon Staar.

RASHMIKA MANDANNA is THE NATIONAL CRUSH

Her career may be just about five years old, and her Bollywood debut is yet to happen. But Rashmika, who has already garnered sizeable popularity in the Kannada, Telugu and Tamil film industries, has been named the National Crush by her fans. Asked if she is aware of the title, the actress recently told IANS: "I am aware of it but at the same time I am not. I know that there is so much love for me out there but I am not swayed by it. I know where my roots are and I know what all this is. I am mindful of who I am a person, so it is not that I am like 'Oh my God!, I get to be swayed away by all love. "

The Tamil actor who has proved his acting prowess in multiple films, has been given the title or Makkal Selvan or People's Treasure. The name came about during the shoot of his 2016 film Dharmadurai. His director Seenu Ramasamy gave the actor the title.

(The above story first appeared on LatestLY on Apr 14, 2021 11:20 AM IST. For more news and updates on politics, world, sports, entertainment and lifestyle, log on to our website latestly.com).