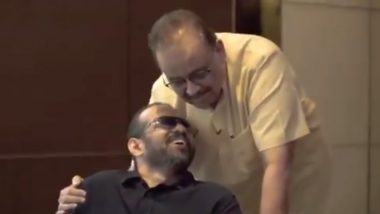 India has lost one of the finest gems it had in its crown of music. Legendary singer SP Balasubrahmanyam passed away on Friday afternoon, leaving everyone tearful. The singing icon who has recorded over 40,000 songs in 16 languages over a period of five decades, was laid to rest with Police Honours on Saturday. As the fans are bidding him goodbye, a viral video also has surfaced where he is seen interacting with a fan. RIP SP Balasubrahmanyam: AR Rahman's Tribute To The Late Legendary Singer Will Take You On a Nostalgia Ride (Watch Video).

The video that is going viral is about a fan from Eelam who lost his eyesight in an explosion. He is a huge fan of SPB and when the late singer had come to know about the same, he decided to surprise him. In the video, one can see the fan singing his song and a cheerful SPB surprising him and having a hearty conversation with him. Check out the video below.

That time he met a fan from Eelam who lost his eyesight in an explosion. #RIPSPB pic.twitter.com/R4H2ROp5hw

This video tuck at the heartstrings of many and hence started re-sharing it on social media. Not just the netizens, but music maestro AR Rahman also could not withhold the fan in him. He shared a wonderful tribute that was a collection of memories and his thoughts on SPB. It is indeed impossible to fill in his void but fans will always remember him through his amazing list of songs.

(The above story first appeared on LatestLY on Sep 26, 2020 03:22 PM IST. For more news and updates on politics, world, sports, entertainment and lifestyle, log on to our website latestly.com).