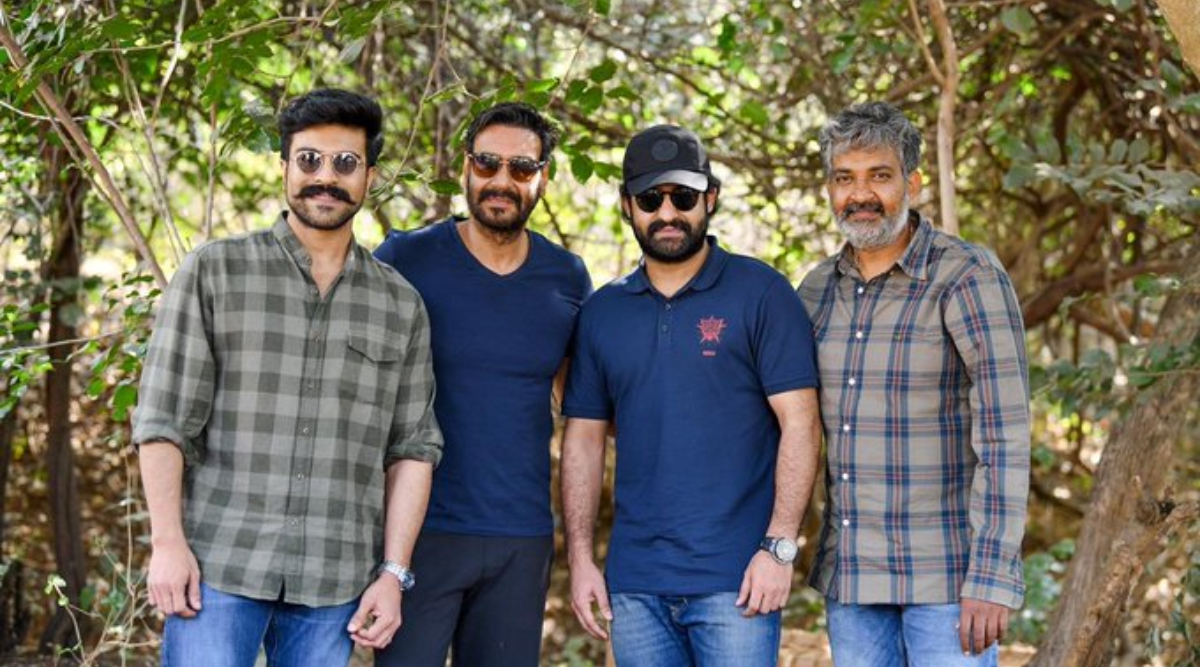 Ajay Devgn on the sets of RRR (Photo Credits: Twitter)

SS Rajamouli's upcoming film, RRR is certainly one of the most anticipated films of the year. Movie buffs are extremely excited for the upcoming magnum opus, given that it has an eclectic cast of Ram Charan, Jr NTR, Alia Bhatt and also a special role by Ajay Devgn. The actor recently started shooting for the period drama and we had seen pictures of Ajay and Rajamouli together before and now a new picture from the sets has surfaced which shows him along with Ram Charan, Jr NTR and the Baahubali director. RRR: Ajay Devgn to Play the Role of Ram Charan’s Father in SS Rajamouli’s Film?

Jr NTR also took to Twitter to share his excitement of working with Devgn. Sharing a picture from the sets, he wrote, "Delighted to welcome you to the world of #RRR dear @ajaydevgn sir." The movie's official Twitter handle also shared the picture and captioned it as, "The stars are shining bright on the sets of #RRR!"It is certainly going to be exciting to see Devgn in this period drama, especially after his recent success with Bollywood's period drama, Tanhaji: The Unsung Warrior. This film is also special because it marks the debut of Ajay Devgn in South Indian Cinema. Ajay Devgn Has an Extended Cameo in SS Rajamouli's RRR?

Check Out the Picture from the Sets of RRR:

The stars are shining bright on the sets of #RRR! @ajaydevgn ji, @tarak9999, #RamCharan & @ssrajamouli from the shoot! #RRRMovie pic.twitter.com/GAOy8Ohb3s

The film is based on a fictional story set in the 1920s pre-independent era. It is inspired by the lives of two revolutionary freedom fighters – Alluri Sitarama Raju and Komaram Bheem. The film also stars Hollywood actress Olivia Morris in a key role. RRR is all set to be released on July 30, 2020.