Jr NTR, who plays the role of fierce Komaram Bheem in RRR, got chatty with Deadline and answered many questions related to the magnum opus. From pandemic problems, OTT release, and more, he was all unfiltered. Check it out. 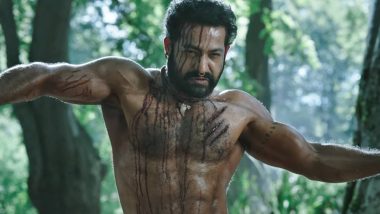 SS Rajamouli's RRR starring Jr NTR and Ram Charan happens to be one of the most anticipated films of 2021. With coronavirus in the air, India is facing a tough time which has led to cinema halls being closed and the production of many films abruptly shut. In these testing times, RRR is a flick (currently on pause due to corona) that has many hopes attached to it as it has the power to revive the theatre business. Recently, Jr NTR, who plays the role of fierce Komaram Bheem in RRR, got chatty with Deadline and answered many questions related to the magnum opus. From pandemic problems, OTT release, and more, he was all unfiltered. Check it out. Jr NTR Has Tested Positive For COVID-19, RRR Star and His Family Have Isolated Themselves.

Comparing the vibe of RRR with Avengers and Jurassic Park, Jr NTR said that they never have thought of releasing their film on an OTT platform. "RRR was never considered for an OTT release. There are certain films that need to be enjoyed as a community on a large screen. Would you enjoy watching Baahubali or Jurassic Park or Avengers on OTT? No. We never thought about doing that, we were willing to wait for cinemas," he said.

We all know how the coronavirus has hit showbiz and it will take a lot of time to bring back where it was. Speaking about if the pandemic has led to any changes in RRR, with regards to budget, or any other way. He replied, "In terms of the budget, it has not changed, and neither has the story. But the speed we were working at changed once we came back to set. We wanted to rush through the shoot before the pandemic impact was felt again. We worked days and nights." RRR: Jr NTR and Ram Charan Are Heroes Being Celebrated in This Festive Special Poster (View Pic).

Jr NTR On His Physical Transformation

The actor also talked about how he went through a physical transformation for RRR and added some muscle mass to his body. "I was put on a hectic training program for about 18 months. I had to achieve the right physical appearance. I was 71 kilos before that for another film, and I had to gain about nine kilos of muscle mass," he said.

Jr NTR is confident that his extravagant film, RRR will surely boost the cinema business. He expressed, "We never knew that a Telugu regional film would really ring bells across the country, and in China, and America, and the UK. I’m pretty confident RRR is going to be such a movie." RRR: Ram Charan, Jr NTR, Ajay Devgn, Alia Bhatt and SS Rajamouli Appeal to Citizens of India To Mask Up and Get Vaccinated (Watch Video).

We are in 2021, but RRR's production had begun long back in 2018, revealed the actor. Jr NTR said, "November 2018. It has been a long journey, when you’re dealing with Rajamouli that’s how it’s going to be. This man shot Baahubali for five years, across two parts. On RRR, we were stuck with the pandemic for about eight months, technically we shot for about nineteen months."

Meanwhile, besides Jr NTR and Ram Charan, RRR also marks the Telugu film debut of Bollywood actress Alia Bhatt and Ajay Devgn. The story of the movie revolves around two revolutionaries and their fight for justice in their country. Stay tuned!

(The above story first appeared on LatestLY on May 12, 2021 03:46 PM IST. For more news and updates on politics, world, sports, entertainment and lifestyle, log on to our website latestly.com).