RRR Updates: Will Ram Charan’s First Look Be Unveiled On His Birthday? 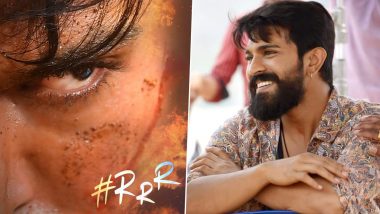 The last update shared by the makers of RRR was pertaining to the film’s release date. The upcoming flick, which was slated to release on July 30 this year has been shifted to January 8, 2021. After that there has been no major update. RRR, starring Ram Charan and Jr NTR in the lead, is the upcoming magnum opus that is directed by SS Rajamouli. Ever since the announcement on RRR has been made, fans are looking forward to catch of glimpse of the lead actors. RRR: These Vintage Stills Are Claimed To Be Ram Charan and Alia Bhatt's Looks From SS Rajamouli Movie (View Pics Inside).

Since yesterday evening, fans are using the hashtag #RRRUpdatesFromMarch and sharing numerous posts on Twitter. Fans who are waiting for an update on RRR, are happy to know that the makers will be sharing the next big announcement in March. And fans are expecting on the occasion of Ram Charan’s birthday, his first look as Alluri Sitarama Raju would be released. It all started after a fan asked when will be the next update on RRR and the user got a reply stating March. RC, as he is fondly called, would be turning a year older on March 27 and fans are hoping that ‘RRR First Look’ or ‘RRR Motion Poster’ or ‘Title Announcement’ or ‘Ram Charan’s First Look’ would be made in March. Although Ram Charan is not on Twitter, he has strong fan clubs. Take a look at the tweets shared by his fans. RRR: SS Rajamouli’s Epic Historical, Starring Ram Charan, Jr NTR, Alia Bhatt and Ajay Devgn Gets a New Release Date!

Will RC's Look As Alluri Sitarama Raju Be Released?

Fans Have Even Started Wishing RC In Advance

And What Do You Think?

Will RC's Look Be Released A Day Before His Birthday?

1st look poster of #RamCharan will be out on his birthday 27th march, 2020 💥🤩#RRRUpdatesFromMarch #RRR #SeethaRAMaRajuCHARAN

Oh! Will Ram Charan Announce About His Next Film?

RRR Team Has Some Major Plans

Also we can expect some updates on these dates as well.

March Is Going To Be Like A Festive Season

This March Is Going To Be Huge Festival To Our CHARANists🤘#RRRUpdatesFromMarch pic.twitter.com/aSfg1XVql8

And Some Fan-Made Designs

INTENSE! This is one of the best #RRRFanArt we have come across so far... Thank you so much for all the love and effort! 🔥🌊 #RRRMovie #RRR #RRROnJan8th https://t.co/XFzDmBkUIJ

RRR is a fictional story, based on revolutionary freedom fighters - Alluri Sitarama Raju (Ram Charan) and Komaram Bheem (Jr NTR). Alia Bhatt and Olivia Morris have been paired opposite the actors, respectively. This film will mark not only Bhatt’s debut in south cinema, but also Ajay Devgn’s debut, who will be making an extended cameo appearance. RRR is reportedly said to be made on a budget of Rs 350 – 400 crore. This film will be produced under the banner of DVV Entertainments. Stay tuned for more updates from the world of entertainment!

(The above story first appeared on LatestLY on Feb 28, 2020 11:16 AM IST. For more news and updates on politics, world, sports, entertainment and lifestyle, log on to our website latestly.com).