Samantha Akkineni to Collaborate with Prashanth in Director Ashwin Saravanan's Next?

After Andhadhun's Tamil remake, Prashanth may sign Ashwin Saravanan's next. 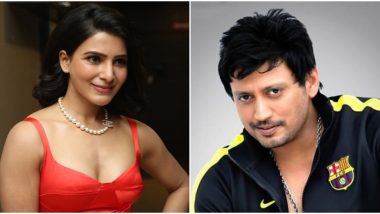 Whoever assumed pregnancy to be the reason for Samantha Akkineni's exit from Vijay Sethupathy and Nayanthara starrer clearly got it wrong. The actress is in fact gearing up for the shooting of her next project with the young director, Ashwin Saravanan. The director rose to popularity with his second movie, Game Over and he has previously Nayanthara in his debut movie, Maya. His new venture with Samantha is supposed to be a horror-thriller, something on the lines of his debut film. And if a report in India Today is to go by, actor Prashanth has been approached for the same. Samantha Akkineni Will Not Quit Films, Jaanu Actress Confirms!

When the portal got in touch with the actor to get a confirmation about his collaboration with Saravanan, he responded saying, "I am in talks with Ashwin Saravanan for his upcoming film. However, it's too early to reveal further details. An official announcement will be made by the producers of the film." He even added about how he's reading multiple scripts and will start signing them one by one. Andhadhun Tamil Remake Confirmed! Thiagarajan’s Son Prashanth to Step into Ayushmann Khurrana’s Shoes.

Saravanan's next with Samantha is touted to be a female-centric movie and the shooting of which will start in April in Dehradun. However, going by the current scenario and coronavirus pandemic, starting the shoot next month seems like an impossible task.

(The above story first appeared on LatestLY on Mar 16, 2020 06:27 PM IST. For more news and updates on politics, world, sports, entertainment and lifestyle, log on to our website latestly.com).