Pictures from the puja ceremony of Sarkaru Vaari Paata, starring Mahesh Babu and Keerthy Suresh, were shared on social media by Mythri Movie Makers. Namrata Shirodkar and Sitara Ghattamaneni were present for it. 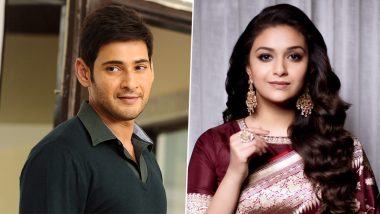 Fans of Mahesh Babu and Keerthy Suresh eagerly keep waiting for updates on their upcoming flick Sarkaru Vaari Paata. Be it the shooting update or lead stars’ roles or any other information, fans look forward to intriguing details. On November 21 the customary puja ceremony took place in Hyderabad where Mahesh Babu’s family members were also present and that includes his wife Namrata Shirodkar and daughter Sitara Ghattamaneni. Sarkaru Vaari Paata: Shooting of Mahesh Babu Starrer to Commence in the US Post Dussehra?

Mahesh Babu’s daughter Sitara clapped the first shot, whereas Namrata Shirodkar switched on the camera. Pictures from the puja ceremony was shared on social media by Mythri Movie Makers, the banner the under which the film is being produced along with GMB Entertainment and 14 Reels Plus. All those who were present for the puja were seen wearing masks and adhering to the protocols owing to the pandemic. Sarkaru Vaari Paata: Keerthy Suresh To Join The Sets Of Mahesh Babu Starrer In January 2021?

The makers have also revealed that the regular shooting of Sarkaru Vaari Paata would go on floors from January 2021. About the shoot, a source had earlier revealed to TOI, “The team is planning to begin shooting schedules without any breaks from January next year. As of now, the pre-production work is in full swing and very soon the team will make an official announcement about the shooting.” Directed by Parasuram, this is the first time that Mahesh Babu and Keerthy Suresh have collaborated for a film.

(The above story first appeared on LatestLY on Nov 22, 2020 08:56 AM IST. For more news and updates on politics, world, sports, entertainment and lifestyle, log on to our website latestly.com).