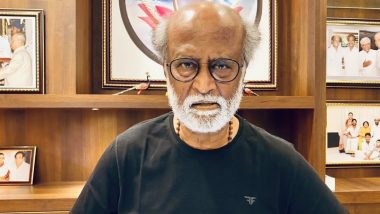 Top star Rajinikanth on Wednesday described as “brutal killing” the death of a Tutcorin father- son duo, alleged victims of police torture, and expressed shock over the ‘inappropriate behaviour’ of some policemen with a Judicial Magistrate probing the matter. “#sathyama vidave koodathu (this should not be spared at any cost,),” the actor said about the episode in a tweet, with the hashtag in Tamil trending on Twitter minutes after he put up the post with an image of him, striking a visibly angry pose. “While the entire humanity has opposed the brutal killing of the father and son by torture, I was shocked at the way some policemen behaved and spoke in front of the (judicial) magistrate. All those involved should get appropriate punishment. This should not be spared,” he said. Tuticorin Custodial Deaths: Rakul Preet Singh, Samantha Akkineni, Malavika Mohanan and Others Express Shock and Grief Over the Incident (View Tweets)

P Jayaraj and his son Bennicks, arrested for ‘violating’ lockdown norms over business hours of their cellphone shop, died at a hospital in Kovilpatti on June 23, with the relatives alleging that they were severely thrashed at the Sathankulam police station by the personnel earlier. The incident had triggered a nation-wide furore, leading to the suspension of five policemen, including an inspector and two Sub-Inspectors. The former SP is on compulsory wait. Earlier, the Judicial Magistrate probing the deaths had informed the Madras High Court Madurai bench that police personnel at the Sathankulam station did not cooperate with him, even as one of the constables made disparaging remarks against him. Singam Director Hari Issues Statement on Jayaraj and Bennicks’ Custodial Deaths, Regrets Glorifying Police in Five of His Cop Films

Subsequently, the court had summoned three policemen, including an Additional SP, on Tuesday where the constable who allegedly made the remarks againsg the JM had submitted he spoke so by mistake since he was “overstressed.” The court, which has taken up the case, had transferred the investigation to CB-CID till the CBI takes over the probe. The Tamil Nadu government had on Monday transferred the probe to CBI.