Soorarai Pottru is produced under the banner of 2D Entertainment and co-produced by Guneet Monga. The poster also highlights that the film would be released in summer 2020. 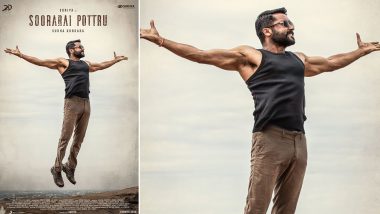 Finally, the first look of Suriya’s upcoming flick Soorarai Pottru has been dropped online. Fans of this Kollywood actor have been eagerly waiting to see the first look. We must say, the wait has been worth the while! The upcoming biopic directed by Sudha Kongara features Suriya in the lead. And this first look is mighty impressive. The handsome hunk's fit and fab physique has left all his fans impressed. Soorarai Pottru: Suriya’s Fans Super-Excited to See the First Look of His Upcoming Film.

When the makers shared the first look of Soorarai Pottru all that fans could notice is his well-built body. Suriya is known to be the style icon down south and now to see this fit avatar of the 44-year-old actor must have inspired many young lads. Suriya is looking dashing in this first look poster. While sharing the first look poster on Twitter, the actor captioned it as, “Here's Maara.. An ordinary man with an extraordinary dream!”

And Here's What Fans Think

Yes This Summer #Sooraraipottru 💪 This is What we Expected

Worth Wait and Stunning Output for the Sleepless night

Thanks a Lot Sir We @Suriya_offl Fans Happy a Lot !!!!!!#SooraraiPottruFirstLook

That style and attitude 🤙#SooraraiPottruFirstLook

That style and attitude 🤙#SooraraiPottruFirstLook

And Soorarai Pottru Has Been Declared As A Blockbuster, Already!!!

It was just few minutes before the release of the first look poster of Soorarai Pottru that the makers announced that they would be releasing the film’s Telugu title as well. It was indeed a sweet surprise for all fans of Suriya. The Telugu version of the film has been titled as Aakaasam Nee Haddhu Ra. Talking about this movie, it is based on the life of Air Deccan founder Captain GR Gopinath. The poster also highlights that the film would be released in summer 2020. Soorarai Pottru is produced under the banner of 2D Entertainment and co-produced by Guneet Monga.

(The above story first appeared on LatestLY on Nov 10, 2019 04:30 PM IST. For more news and updates on politics, world, sports, entertainment and lifestyle, log on to our website latestly.com).