Kamal Haasan and SP Balasubrahmanyam worked together in many movies but did you know there was one movie that never released? We are talking about Kanden Seethaiyai, the Tamil remake of Malayalam movie Ammayane Sathyam. 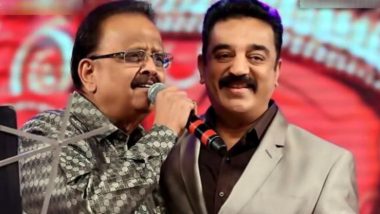 SP Balasubrahmanyam's name still brings a lump in our throats.  We lost many gems to COVID and he is one of them. For those who are born in the 90s or grew up in that decade, associates his voice with Salman Khan. Anytime if another singer voiced Salman, we would immediately disregard it. Such was our love for his voice. But the singer was also an actor. Kamal Haasan had even said that SPB wasn't too keen about appearing in front of the camera but when he did, he was simply marvelous. Both them worked together in movies too but did you know there was one movie that never released? RIP SP Balasubrahmanyam: The Legend's Last Hindi Song Was For This Shah Rukh Khan and Deepika Padukone Film (Watch Video).

Kamal Haasan and SPB were supposed to work together in the Tamil remake of Malayalam movie Ammayane Sathyam. The remake was titled Kanden Seethaiyai. The movie is about a girl who disguises herself as a man to work as a servant in the house of bachelors.

The film was supposed to be directed by Balachandra Menon who had directed the original as well. As per his interview in Mathrubhumi Star and Style, the film stayed unreleased because of Haasan's demands for change in the script. Well, we don't know what actually transpired by it would have been nice to watch this movie.

(The above story first appeared on LatestLY on Jun 04, 2022 08:20 AM IST. For more news and updates on politics, world, sports, entertainment and lifestyle, log on to our website latestly.com).