In fact, back in the 90s, SP was known as the playback voice for Salman Khan and has crooned over 10 songs for the superstar. However, his last Bollywood song was for Shah Rukh Khan. 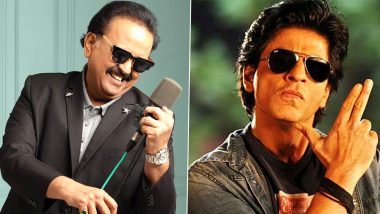 And 2020 saw the death of yet another legendary entertainment industry personality, singer SP Balasubrahmanyam. The legendary singer breathed his last on September 25, 2020 at Chennai's MGM Healthcare. SP was admitted to the hospital on August 5, 2020 after he tested positive for COVID-19. His health remained unstable for a while but he was said to be recovering. However, his condition deteriorated on September 24. SP Balasubrahmanyam, Popular Singer and Actor, Dies At 74.

SP Balasubrahmanyam was a celebrated singer, who had a record of being the only Indian playback singer to have recorded over 40,000 songs in almost 17 languages. SP Balasubrahmanyam also has super hit Hindi songs to his credit. In fact, back in the 90s, SP was known as the playback voice for Salman Khan and has crooned over 10 songs for the superstar. However, his last Bollywood song was for Shah Rukh Khan. Yes, SP rendered the title track for Chennai Express which was played during the end credits of the film. RIP SP Balasubrahmanyam: 8 Melodious Songs That Are Proof of Why the Late Singer Was the Perfect Playback Voice for Salman Khan! (Watch Videos).

SP Balasubrahmanyam has crooned songs in not just Telugu and Hindi, but also in Kannada, Tamil and Malayalam films as well. The singer's passing away due to ill health has saddened the entire nation. SP's loss is irreparable and irreplaceable. SP's fans will get their chance to pay their last respects to the singer as his mortal remains will be placed at a farmhouse on Mount Road near Sathyam theatre. Our prayers are with SP's family. May his soul rest in peace!

(The above story first appeared on LatestLY on Sep 25, 2020 03:41 PM IST. For more news and updates on politics, world, sports, entertainment and lifestyle, log on to our website latestly.com).