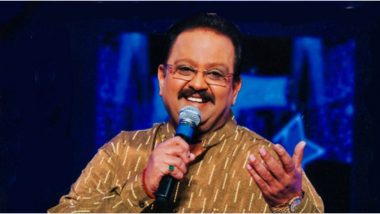 SP Balasubrahmanyam's recent health update is on a positive note and we are glad to read it. The legendary singer is recovering well and the same has been confirmed by popular music composer S Thaman. While earlier update suggested his health was getting critical and he was even shifted to MGM hospital's ICU unit, the recent one highlights his steady progress. "Our prayers Have worked #SPBalasubrahmanyam gaaru is recovering well," tweeted Thaman S thereby giving all the music fans a huge sigh of relief.  SP Balasubrahmanyam Health Update: The Legendary Singer is on Life Support and His Condition is Critical.

SP Balasubrahmanyam was admitted to Chennai's MGM hospital on August 5 after he had tested positive for COVID-19. While doctors had advised him home quarantine, he insisted on getting admitted for the safety of his family. The singer is undergoing his coronavirus treatment since then. While he expected he'd get discharged in a day or two, his treatment certainly took longer than expected. SP Balasubrahmanyam's Brother SP Charan: 'We Are All Confident That SPB Will Be Back With All Of Us'.

Our prayers Have worked #SPBalasubrahmanyam gaaru is recovering well 🙏🏻♥️

The singer had also taken to his Facebook account to give an update to his fans. He had shared a video saying, “Since 2-3 days I was having discomfort. Chest congestion which for a singer is nonsense. I also had phlegm formation, cold and fever. These three things. Otherwise I didn’t have any problem. I did not want to take it easy so I went to the hospital to get myself checked," he had said in his video while also thanking them for their concern.

(The above story first appeared on LatestLY on Aug 15, 2020 03:42 PM IST. For more news and updates on politics, world, sports, entertainment and lifestyle, log on to our website latestly.com).