Within a few hours of the film's release in theatres today (April 9), a pool of fans took to Twitter to share their thoughts about the film. The film is getting considered as an amazing comeback for Pawan and people are raving about the powerful and dramtic story. 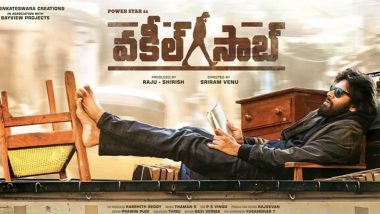 Vakeel Saab, which marks Pawan Kalyan's return to films after two years, has finally made it to the theatres. Helmed by Venu Sriram, Vakeel Saab is the remake of the Hindi film Pink that had starred Amitabh Bachchan in the lead role. Vakeel Saab is jointly produced by Boney Kapoor and Dil Raju and stars Nivetha Thomas, Anjali, Ananya Nagalla in key roles. The film also has Shruti Haasan in a cameo role. The trailer and promos of the film had impressed the audience and it looks like the film is also making the same kind of impact on them. Vakeel Saab: Theatre in Telangana Vandalised by Pawan Kalyan Fans After Screening Halted Over Technical Glitch.

Within a few hours of the film's release in theatres today (April 9), a pool of fans took to Twitter to share their thoughts about the film. The film is getting considered as an amazing comeback for Pawan and people are raving about the powerful and dramatic story. Thaman S' background music score is also being loved by the audience. The courtroom drama revolves around the injustice that women face in today's time and the audience feels that this film is the 'need of the hour' film in today's society. Vakeel Saab: 35 Days Required To Complete The Shooting Schedule Of Pawan Kalyan Starrer?

All Hail For Kalyan

Congrats to the whole team !!

#VakeelSaab:Blockbuster written all over. Second half makes the difference.

One of the best performances in @PawanKalyan's career.He just killed it.🔥

Thought I would stay away from social media for a while....but just want to say this - #PawanKalyan is terrific in the second half of #VakeelSaab ...the entire courtroom segment is very well done. Loved @i_nivethathomas @MusicThaman’s work...and commendable work by Venu Sriram.

Praises For The Female Leads!

Last 1/2 hour of #VakeelSaab is interesting. The flashback episode of hero (not in original) is badly written. Pawan Kalyan is superb as #VakeelSaab. Girls have done a good job. @MusicThaman BGM is good. Not a bad film.

And it’s a good news to PSPK fans! #VakeelSaabReview pic.twitter.com/iftOqfVNCv

My Man @MusicThaman you just took the film to another level. Absolutely speechless with your work . “Brilliance” is an understatement 🙏🏻

Proud of you Brother ♥️ #VakeelSaab

The Best Of Pawan Indeed!

BLOCKBUSTER second half. Always believed no one balances sarcasm and aggression like how Kalyan does and this is is what second half is all about. Venu brings out the be(a)st in Kalyan and how!! 💥💥#VakeelSaab

Praises For The Screenplay

For the unversed, two years back superstar Pawan had said goodbye to films with an aim to focus on his political career. But when approached by the makers of Vakeel Saab, the actor gave a nod to doing the film. The movie was initially scheduled to release on May 15 in theatres, but due to the pandemic, the work on the film couldn't be completed and so it got delayed further.

(The above story first appeared on LatestLY on Apr 09, 2021 02:03 PM IST. For more news and updates on politics, world, sports, entertainment and lifestyle, log on to our website latestly.com).