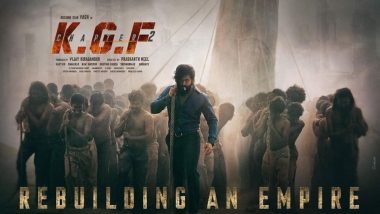 Owing to the ongoing global crisis, cinema halls were also needed to be closed down. This was done in order to avoid mass gatherings. There is no clarity by when the cinema halls will be reopened. This has led several makers to release their films on OTT platforms. Something similar happened in case of KGF Chapter 2 as well. There were rumours doing rounds that this Yash starrer will be skipping theatrical release, but reports have surfaced online citing that the makers have denied such reports. KGF Chapter 2 First Look: A Suave Looking Yash and his 'Army of People' Look Determined to Build a New Empire.

KGF Chapter 2 also stars Bollywood actor Sanjay Dutt as the antagonist. This upcoming Kannada language film is a sequel to the 2018 film, KGF Chapter 1. Yash would be reprising his role in this sequel. Reports were doing rounds that the streaming giant Amazon Prime Video has offered KGF Chapter 2 a huge deal. It was reported that Amazon Prime had quoted Rs 55 crore to acquire the digital rights of this upcoming period drama. Sify.com, quoting an entertainment portal, mentioned that the makers have clarified that this ‘film will release in theatres first, no matter how long it takes’. 5 South Movies Confirmed to Premiere on Amazon Prime Video.

KGF Chapter 2, directed by Prashanth Neel, is slated to release on October 23 this year. This film will be dubbed in Hindi, Malayalam, Tamil and Telugu languages as well.

(The above story first appeared on LatestLY on Jun 03, 2020 02:37 PM IST. For more news and updates on politics, world, sports, entertainment and lifestyle, log on to our website latestly.com).