Amitabh Bachchan Will 'Not Be' Replaced As Kaun Banega Crorepati 12 Host, Say Reports 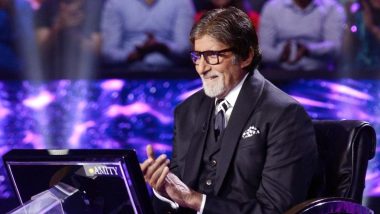 While Maharashtra Government's announcement on May 31, allowing the shoots of film and television shoots to begin from June end was a welcome move for many, it was also a huge disappointment for artists and workers in the entertainment business for those below the age of 10 and above the age of 65. As people falling under these age-groups were more bound to contract the coronavirus given their immunity levels, the government banned them from working. However, this has not boarded well with a lot of senior actors. Amitabh Bachchan Tests Positive for COVID-19, Admitted to Nanavati Hospital in Mumbai.

There was also news of how this new move will affect the shooting of Amitabh Bachchan's Kaun Banega Crorepati's 12th season. Even though Big B shot for the promo from home and was all set to resume shoots, this new diktat has thrown water all over their plans. It was being speculated that Big B might be replaced on the show. But looks like no such thing will be happening. After Amitabh Bachchan and Abhishek Bachchan Test Positive for COVID-19, BMC Declares Their Juhu Bungalow Jalsa As a Containment Zone.

A source close to Mid-day revealed to the tabloid that no such thing was going to happen. "KBC cannot be imagined without Big B. There is no question of the megastar being replaced. The shoot may be rescheduled." Despite the show not being shot right now, the makers had begun their selection process in the month of May itself. Well, now with Amitabh contracting the Coronavirus, looks like KBC 12 will be delayed even further.

(The above story first appeared on LatestLY on Jul 12, 2020 07:05 PM IST. For more news and updates on politics, world, sports, entertainment and lifestyle, log on to our website latestly.com).