After Amitabh Bachchan and Abhishek Bachchan Test Positive for COVID-19, BMC Declares Their Juhu Bungalow Jalsa As a Containment Zone 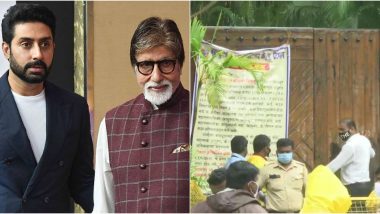 The news of Amitabh Bachchan and Abhishek Bachchan testing positive for coronavirus has shaken the nation who are sending their prayers and good wishes to the actors for their speedy recovery. Both Amitabh Bachchan and Abhishek confirmed the news of their coronavirus reports on social media on July 11. The actors have been admitted at Nanavati hospital. An update on Big B's condition shared earlier by the hospital stated that the actor is stable and has mild symptoms. Recent reports suggest that BMC sanitation workers have now reached Amitabh Bachchan's Juhu residence to sanitize the bungalow. After Abhishek Bachchan Tests Positive for COVID-19, the Dubbing Studio He Visited Earlier Gets Temporarily Shut.

As per an update shared by ANI, BMC workers were spotted arriving at the Bachchan bungalow Jalsa earlier this morning. As for the rest of the family, it has been reported that Aishwarya Rai Bachchan, Aaradhya Bachchan and Jaya Bachchan have tested negative for the antigen test but their swab results are yet to be reported. Amitabh Bachchan in his tweet revealing the news also asked everyone who came in contact with him in the past ten days to get tested. The Bachchan bungalow has now been declared by BMC as a containment zone. Aishwarya Rai and Jaya Bachchan's Antigen Test Comes Negative for COVID-19, Swab Test Results Awaited.

Maharashtra: Sanitisation workers of the Brihanmumbai Municipal Corporation (BMC) arrive at 'Jalsa', the residence of actor Amitabh Bachchan in Mumbai.

Actor Amitabh Bachchan and son Abhishek Bachchan tested #COVID19 positive and both have been admitted to a hospital. pic.twitter.com/X3KZ3nziwI

Jalsa Declared as a Containment Zone by BMC:

Maharashtra: Brihanmumbai Municipal Corporation officials put a banner outside 'Jalsa', the residence of actor Amitabh Bachchan in Mumbai, to define it as a containment zone.

Abhishek Bachchan was spotted outdoors, visiting the dubbing studio for his series, Breathe Into the Shadows recently. The dubbing studio that the actor visited has now been temporarily shut. After the news of Bachchan Sr and Jr getting tested positive hit the news, celebrities have been wishing the duo a speedy recovery on social media.

(The above story first appeared on LatestLY on Jul 12, 2020 11:00 AM IST. For more news and updates on politics, world, sports, entertainment and lifestyle, log on to our website latestly.com).