Former Bigg Boss 14 contestant Kamya Punjabi feels that Rubina Dilaik's game is getting spoilt due to Abhinav Shukla. And we totally agree with her thought. Check out the full story. 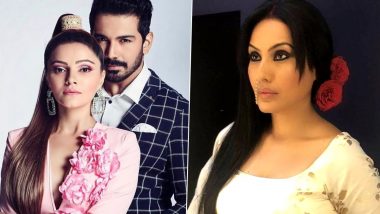 The controversial reality show Bigg Boss 14 is now turning into a battlefield of sorts. Right from Kavita Kaushik and Aly Goni's massive fight over the baap comment, Nikki Tamboli's never-ending drama to Rubina Dilaik-Jasmin Bhasin's friendship going for a toss, the reality series is surely getting meaty. Having said that, on tonight's (Nov 26) episode of BB, we are going to see Jasmin versus Rubina wherein the two literally end their friendship. But what we see is that Abhinav Shukla has a problem with the way Rubina fought with Bhasin. The man also screams at her for the same. Now, Kamya Punjabi who is an ardent follower of the show has a suggestion for Abhinav. Bigg Boss 14: Kamya Punjabi and Diandra Soares Feel Jasmin Bhasin Has Turned Into a ‘Naagin’ on the Reality Show (View Tweet).

Kamya took to her Twitter and re-shared a clip which sees Abhinav and Rubina in a heated argument. Trust us, we have never seen these two going through such a turmoil and it's heartbreaking to see the same. However, we totally agree with former BB contestant Punjabi where she has advised Abhinav to not poke Rubina all the time as that's spoiling her game. Bigg Boss 14 November 24 Episode: Aly Goni Pays a Huge Prize for Getting Violent Towards Captain Kavita Kaushik – 6 Highlights of BB 14.

Oh goddddd.... let Rubina play her own game plssss.. i never thought i wud say this but abhinav u are spoiling her game big time 🙄 https://t.co/0BeiuLdZqt

It was in the last Weekend Ka Vaar with Salman Khan when even the host had told Abhinav that he is making Rubina look like a villain on the show. Well, we hope that the mister (Abhinav) gives a thought to this as he is also nominated and you never know what the audience might feel and decide. Stay tuned!

(The above story first appeared on LatestLY on Nov 26, 2020 07:46 PM IST. For more news and updates on politics, world, sports, entertainment and lifestyle, log on to our website latestly.com).