Your daily dose of Bigg Boss 14 is here! Talking about tonight’s (Nov 24) episode, the main highlight was surely the big fight between captain Kavita Kaushik and Aly Goni. However, the interesting takeaway from the episode was how Bigg Boss proved that violent behaviour of any kind would not be entertained and so Aly’s tod-fod led him to pay a huge prize. 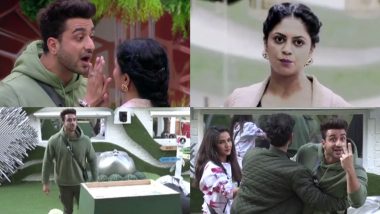 Your daily dose of Bigg Boss 14 is here! Talking about tonight’s (Nov 24) episode, the main highlight was surely the big fight between captain Kavita Kaushik and Aly Goni. However, the interesting takeaway from the episode was how Bigg Boss proved that violent behaviour of any kind would not be entertained and so Aly’s tod-fod led him to pay a huge prize. Apart from this, equations and dynamics also have started fluctuating inside the house. Incase, you missed the drama, here’s the highlight from BB 14. Bigg Boss 14 November 23 Episode: Nominations See Contestants Battle Each Other, Kavita Kaushik Calls Rahul Vaidya A 'Bekaar Singer' - 5 Highlights of BB14 Episode.

The show starts with Eijaz Khan and Pavitra Punia discovering at night that the gas flame is on and there's tawa on it. The two tells the same thing in the morning to all other inmates and they agree that Bigg Boss 14's house has some ghostly vibes. Eijaz to this adds that he is freaking scared as he sleeps in the living area.

After seeing how rules are being back-to-back broken by a few inmates in the house, Bigg Boss gives a special power to captain Kavita Kaushik wherein she needs to punish the culprits by taking away their personal items/essentials. FYI, it was during Kavita's captaincy Aly Goni, Abhinav Shukla, Eijaz Khan, Jasmin Bhasin were seen stealing luxuries items. If Kavita comes out as a winner in this task, she will get a chance to fight as a candidate for the next captaincy.

Nikki Tamboli tells Kavita that she should first take away essential items of Aly as he was the one who gave Pavitra Punia chocolates (luxury item). The captain goes to the bathroom area and picks Aly's trimmer and puts it in the huge box kept in the garden area. This irks Goni and he takes his trimmer back. Amid this, the two start arguing wherein the captain's baap comment fumes Aly and he gets violent towards Kavita. She gets hurt and so demands Aly's elimination.

Amid this, Rubina goes to Kavita and asks her if she needs the first aid, but this leads to an argument between the two where the latter blames her for being sympathetic. This irks Abhinav Shukla and he tells Rubina, what was the need to approach her and that's how the husband-wife fight. Bigg Boss 14: Jaan Kumar Sanu Is Not Interested in Being Friends With Nikki Tamboli After the Show (LatestLY Exclusive).

Ahead, we see Kavita wanting justice from Bigg Boss over the whole violence by Aly in the task. She becomes adamant and tells to BB that she will not play the task until and unless the decision is been declared. She even removes her mic and cries.

After the mayhem, Bigg Boss finally comes to the rescue and declares Aly's violent act as 'nirashajanak'. That's not as, as BB also warns and nominates Goni for the next week.

That's it, guys! This were the top five highlights from tonight's episode of Bigg Boss. It will now be interesting to see what the upcoming days will see inside the house. Stay tuned!

(The above story first appeared on LatestLY on Nov 25, 2020 12:06 AM IST. For more news and updates on politics, world, sports, entertainment and lifestyle, log on to our website latestly.com).