Bigg Boss 13 is all set to commence soon and it is going to be super exciting to see who will soar the temperatures with their hotness this time. Previously, we have seen contestants such as Sunny Leone, Mandana Karimi, Priyanka Sharma turn up the heat. Let's look at the hottest BB contestants from previous seasons. 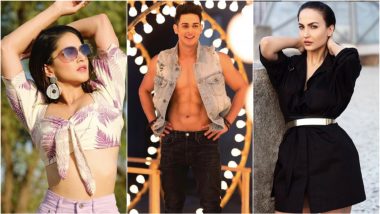 Bigg Boss 13 is all set to commence soon and we bet you are excited to find out which celebrities will be entertaining us in this dramatic house. The popular reality show pits a number of contestants against each other as they live in a purpose-built isolated house.  Each year, we have seen some popular faces of Television, music industry, fashion and many other sectors have stayed at the Bigg Boss house and hit the headlines.  Bigg Boss 13: Salman Khan Launches the Reality Show on a Metro Station Amid Much Fanfare (View Pics).

Sunny Leone entered as a wild card contestant in Bigg Boss season 5. She set the house on fire with her moves and who can forget her famed pole dance on "Ye Mera Deewanapan Hai".

Mandana Karimi is an Iranian actress and model based in India. She appeared in the 9th season of Bigg Boss and also went on to become e the 2nd runner up of the show in 2015.

Lopamudra Raut is an Indian model, who represented India at the Miss United Continents 2016 pageant. She appeared in Bigg Boss season 10 and was one of the hottest contestants of the season. She became the second runner-up on the show.

Bigg Boss 11s most controversial contestant, Priyank Sharma got into trouble at the Bigg Boss house often but also remained to be a favourite of the ladies watching the show all through the season. The former Splitsvilla contestant often flaunted his washboard abs on the show, leaving his female fans in a tizzy.

Nora Fatehi may be the current 'it' girl of Bollywood for her amazing dancing skills but she already had everyone swooning over her ever since her Bigg Boss stint. Nora was part of Bigg Boss 9 for a while and hit the headlines for her chemistry with co-contestant Prince Narula.

We've all got that little bit of black and white inside us..but what matters is the part we choose to act on ! ...That's who we truly are..✌ #bnw #blacknwhite #bnwphotography #bnwmood . Shot by @shreko ; HMU @taniyaamua ; styling @vagabondbyjaanvichowhan

Sequeira was among the fourteen contestants in the ninth season of the reality television show Bigg Boss. He was accompanied by his girlfriend Rochelle Rao on the show. Keith's gentlemanly charm was one of his biggest selling points on the show.

Gauahar Khan won the 7th season of Bigg Boss. She was not only one of the most outspoken and powerful contestants of the season but also the hottest.

Karishma Tanna is an Indian television and film actress who appeared on the 8th season of the show. Tanna and co-contestant Upen Patel's relationship was one of the biggest highlights of the show. She was the first runner-up in the reality show and lost to Gautam Gulati.

Say whaaatttttt Am I single ? Or am I in a relationship , am I hoeing ? Find out on the next episode of mind ur fucking business ... 🙃🤗much love , for the concerned parties 🎈

Gauahar Khan and Kushal Tandon's relationship was what audiences looked forward to in season 7. He was eliminated from Bigg Boss 7 over his violent act against co-contestants Tanishaa Mukherjee and VJ Andy. Tandon was one of the most tweeted personalities of the season.

The look you give to those who talk like they know your true story but they’ve not even seen your journey from the day you started.🌪 . . . #pure #hardwork #baby #nopainnogain #dedication #mindset #integrity #upbringing #honesty #rightway #belief #gratitude #thankyou #god #elliavrram #actress #artist #dreamer

The Swedish model was a part of Bigg Boss season 7 and often hit the headlines for her flirty talks with host Salman Khan. There were speculations about AvrRam and Khan's relationship especially since the latter helped launch her in Bollywood.

Bigg Boss 13 is all set to premiere on September 29 and will be returning with its amazing host Salman Khan again. Let's see what new controversies the new season brings with it.

(The above story first appeared on LatestLY on Sep 24, 2019 03:49 PM IST. For more news and updates on politics, world, sports, entertainment and lifestyle, log on to our website latestly.com).