Breathe Into The Shadows Teaser: Amit Sadh's Dark Side Adds an Interesting Twist to the Storyline (Watch Video) 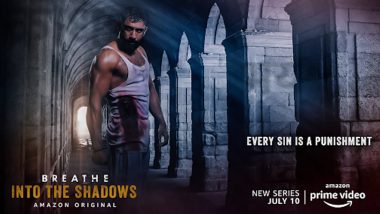 Amit Sadh in Breathe Into The Shadows (Photo Credits: Twitter)

Abhishek Bachchan's web debut, Breathe Into The Shadows looks intriguing enough. Firstly the fact that he's foraying into the digital space is enough reason in itself and secondly, its dark characters add to our fascination. Amazon Prime's Original earlier had R Madhavan collaborate with Amit Sadh where the former played a helpless but determined father who's willing to go to any lengths to save his dying child. And Sadh played a police officer chasing the same criminal. Breathe Into The Shadows Teaser: Abhishek Bachchan, Amit Sadh's Series Gets A Mysterious New Promo (Watch Video).

However, when it comes to season 2, it's still unclear if Amit will reprise his role as a cop or switch sides and play something darker and violent. As per the series' new teaser, Amit plays a prisoner with a motive and a sinister past. As their caption reads, "every sin has a punishment and every story has a past,", it means either this story is new altogether without any connection to the show's previous season or that the makers have probably developed an edgier character for him this time. All in all, Sadh's teaser has boggled our minds and filled it with one too many thoughts. Breathe Into the Shadows Poster: Abhishek Bachchan's a Vulnerable Father Waiting for his Missing Child to Return.

Check Out the Teaser

Breathe Into The Shadows' trailer will drop online on July 1. The series that also stars Nithya Menen and Saiyami Kher in key roles besides Amit Sadh and Abhishek Bachchan will start airing from July 10.

(The above story first appeared on LatestLY on Jun 25, 2020 12:48 PM IST. For more news and updates on politics, world, sports, entertainment and lifestyle, log on to our website latestly.com).