Broken But Beautiful 3: Makers Give a Sneak Peek of Sidharth Shukla and Sonia Rathee’s Scintillating Chemistry on Valentine’s Day 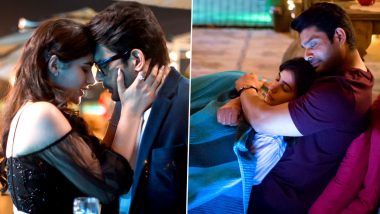 Ever since the announcement of Broken But Beautiful 3, Sidharth Shukla's fans have been dying to know more details about the show. The actor often is seen teasing the fans with pictures of himself from the sets of BBB3 and keeping up the excitement for the show. The makers have till now spilled no beans about the upcoming season but today on the occasion of Valentine's day, treated the fans with some stills of the lead actors from the show. Sidharth Shukla Shares a BTS Photo From Broken But Beautiful 3 Sets, Jokes About Being Back to Studying.

Sidharth and debutant Sonia Rathee will be seen romancing each other on Broken But Beautiful season 3 and the makers gave a sneak peek of their amazing chemistry. In one of the pictures, Sidharth and Sonia are seen enjoying some food while in another we see the couple cuddling in a romantic setting. Other pictures also show them sharing intimate moments and this surely will increase everybody's excitement for the show. Check out the still here:

Comment with a ♥️ if you’re looking forward for these broken hearts to mend us all with their beautiful love story.@ektarkapoor@sidharth_shukla#SoniaRathee@ZEE5Premiumpic.twitter.com/tdfTGMNRvm

Sharing the announcement trailer of the show, Sidharth had captioned the video on Instagram as, "Every end leads to a new beginning and this one is close to all our hearts. The journey begins today as we introduce to you, Rumi and Agastya, the broken hearts that will mend us all with their beautiful love story. #BrokenButBeautiful season 3 filming begins soon!" Broken But Beautiful 3: Shehnaaz Gill Will Not Romance Sidharth Shukla In Ekta Kapoor's Show?

Talking about the show, not many details have been given about the show, but it sure will be fun to see Sidharth romance Sonia Rathee in Broken But Beautiful 3. His character is named Agastya while Sonia's character is named Rumi. Earlier, it was being speculated that Bigg Boss 13's Shehnaaz Gill will be romancing Sidharth in the show but that did not happen due to several reasons.

(The above story first appeared on LatestLY on Feb 14, 2021 07:08 PM IST. For more news and updates on politics, world, sports, entertainment and lifestyle, log on to our website latestly.com).