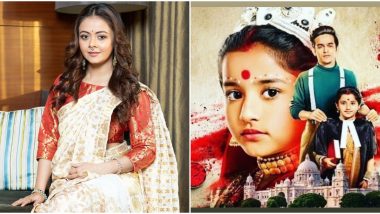 A few days back, it was being reported in certain sections of the media that Bigg Boss 13's 'Bahu Bani Babe', Devoleena Bhattacharjee, who was last seen on the fiction space in Saath Nibhana Saathiya, will make her comeback to fiction shows with Colors' social drama Barrister Babu. And this had fans of the actress pretty excited. It was reported that owing to the shooting constraint amid the lockdown, that has led to a host of shows being taken off air, the makers had decided to show a leap in the show with Devoleena stepping in as the grown-up Bondita. Devoleena Bhattacharjee to Play Grown-Up Bondita In Barrister Babu After the Show Takes A Leap? (Deets Inside).

However, here's some disappointing news for the actress' fans. Devoleena is not doing Barrister Babu and child actress Aurra Bhatnagar will continue playing Bondita. Devoleena Bhattacharjee Rubbishes Claims of Her House Help Testing Positive For COVID-19, Says 'He Came In Contact With A Patient But Has Tested Negative.'

Confirming the news to producer Sumeet Mittal revealed to TOI, "We haven’t approached anyone and are not even considering any other artiste to step into the shoes of Aurra. We plan to continue with her, as there is a lot in the story to explore with her."

On her part, Aurra's mother Deepti Bhatnagar Badoni also told the daily that while she too had been hearing rumours of her daughter being replaced on the Colors show, they hadn't received any communication from the production house about her daughter being replaced. She also said, "I can’t say about the future, but for now, Aurra will continue to be a part of the show."

(The above story first appeared on LatestLY on Jun 04, 2020 08:23 AM IST. For more news and updates on politics, world, sports, entertainment and lifestyle, log on to our website latestly.com).