Doordarshan wasn't just a channel for people from the 80s and 90s, but a one-stop destination for all our entertainment needs, by choice and compulsion. That was before crass eroded class from Indian Television with the advent of K-serials. On its 62nd birthday, let's talk about Doordarshan shows that gave us a fun childhood. 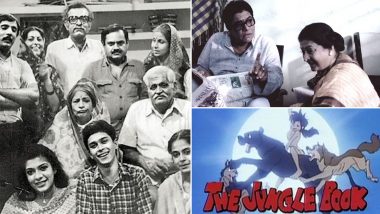 Doordarshan was incepted on September 15, 1959. Since then, the channel has been a source of a lot of entertainment. For those who were born in that era when there was just one national channel, Doordarshan was nothing short of a goldmine. There was something for everyone. If Sunday mornings were booked for kids, adults had the whole evening to themselves. There were special shows during summer vacations for kids like Chutti or Guchcha. To stimulate minds, there were quiz shows, Surabhi, The Turning Point or Krishi Darshan for that matter. So on its 62nd birthday today, we decided to take a trip down memory lane to talk about TV shows we will always be thankful to Doordarshan for.  World Television Day: Byomkesh Bakshi, Captain Vyom, Jungle Book, Chandrakanta – 10 Doordarshan Shows From The 90s That Gave Us An Awesome Childhood

Hum Log was Doordarshan's first family soap opera which aired once a week. Deserted streets and crowded homes were the sights in those where everyone watched and related to the trials of a middle-class joint family.

Those were the days when socio-economic and political surroundings lent themselves to the narratives on TV. Nukkad highlighted the plight of young people who are struggling to find a footing in their lives financially and how that has an impact on their personalities. The tone moves from being satirical to dark humour.

We knew Renuka Shahane before she fell several steps to die a tragic death in Hum Aapke Hain Koun! and that was because of Surabhi. It was a treasure trove of information as the show had featurettes on several important places and moments from the history of India. Postcards and Inland Letters were our lives!

Even today, people remember the title track of the show which is so synonymous with our childhood. Mowgli and his adventures hit differently for us and so does "jungle jungle baat chali hai pata chala hai"

A Hindi adaptation of the Arabian Nights was our window to the land of magic before Harry Potter happened. Flying carpets, talking birds, giants, demons, magical lamps... you name and we had it.

Potli Baba Ki was a television series that narrated stories through puppets. An ingenious way to make kids aware of a different and very Indian form of story-telling. We were in love with the title track as well, written by Gulzar and composed by Vishal Bharadwaj.

The Pathak sisters take the cake here with their matter-of-fact comedy and delectable charm. This is just roaringly funny.

Not many remember this show but it was fantastic anthology series of people from a village. So you see, Netflix bringing in anthology series isn't a big deal because we have grown watching the same on Doordarshan.

(The above story first appeared on LatestLY on Sep 15, 2021 08:20 AM IST. For more news and updates on politics, world, sports, entertainment and lifestyle, log on to our website latestly.com).