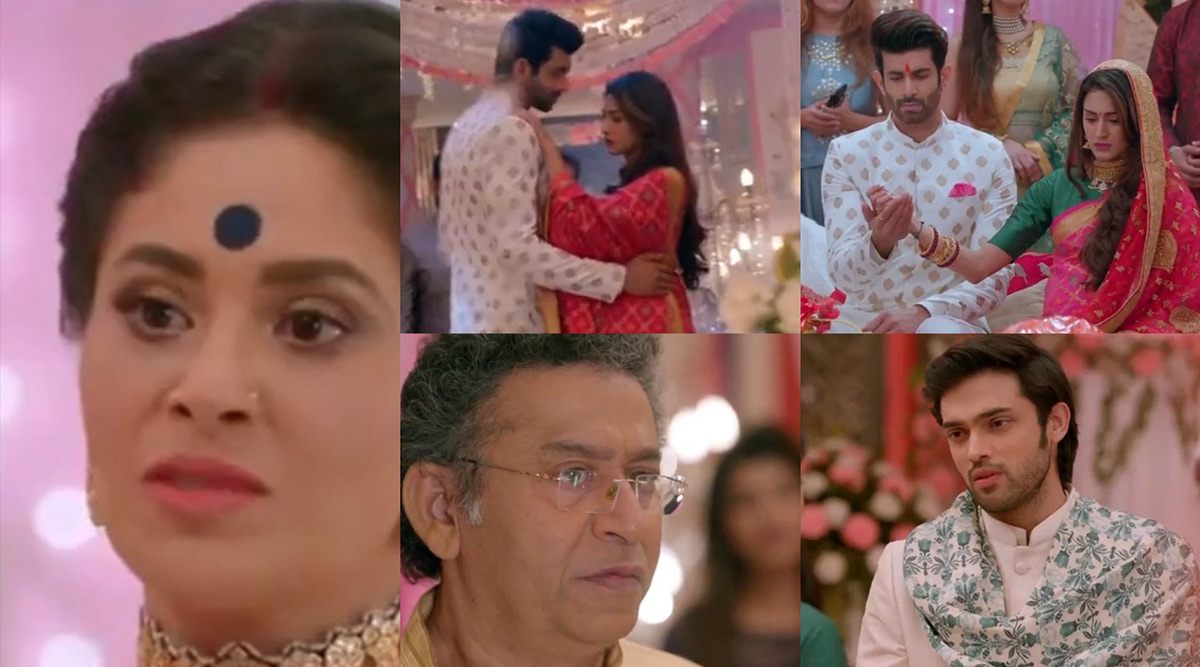 In yesterday’s episode of Kasautii Zindagii Kay 2, we saw Viraj notices Anurag massaging Prerna’s feet and confronts him. Anurag thinks that he should stay away from Prerna if it is affecting her relationship with Viraj. Ronit attacks Shivani and threatens her at gunpoint. In tonight’s episode, Anurag (Parth Samthaan) tells Sonalika (Aamna Sharif) that even if his brain does not remember anything his heart still remembers his loved ones. Sonalika gets tensed and thinks of Prerna (Erica Fernandes) who had told her that one day Anurag will remember everything as he still has feelings for her. Sonalika tells Anurag that he will get his tablet and goes from there. Kasautii Zindagii Kay 2 January 15, 2020 Written Update Full Episode: Insecure Viraj Confronts Anurag on Seeing him Massage Prerna, while Ronit gets Shivani at Gunpoint.

Sonalika reminisces how she got the medicines from the doctor to slow down Anurag’s brain and his recovery so that it will be difficult for him to remember anything from his past. Sonalika takes the medicine to give it to Anurag. Meanwhile, Ronit sees Prerna and tells her that her car is parked in the wrong place and she will have to move it. Just when Prerna is about to go out, Viraj comes and tells Prerna that he wants to talk to her. Prerna tells Viraj that she will meet him later as she has to go out to park her car. Viraj tells Prerna that he will tell his driver to do it. Ronit gets furious as his plan has failed.

Anurag searches for Prerna everywhere as he wants to tell her something. Viraj takes Prerna to a room and tells her that he was thinking of cancelling their wedding. But he realized that he loves her now. Prerna is shocked by Viraj’s revelation. Viraj tells Prerna that he thought that she likes Anurag. Prerna tells she does love Anurag. Viraj misunderstands and says that she does as a friend and that they both love each other and care for each other. Viraj tells that he is ready to marry her now and will wait for her answer, leaving Prerna disturbed. Kasautii Zindagii Kay 2 January 14, 2020 Written Update Full Episode: As Sonalika Instigates Viraj against Prerna, Anurag Enjoys a Romantic Moment with the Latter on the Dance Floor.

Prerna thinks she has to talk to Viraj and tell him that he should not hope for anything from her as she cannot think of anyone else other than Anurag as her life partner. Prerna sees Sonalika mixing something in the water and telling the waiter to give the spiked drink to Anurag. Prerna calls out to Anurag and tells she wants to tell him something and takes the drink from his hand and keeps it on the side table. Suddenly she starts coughing, Anupam comes and gives her the spiked water, Prerna drinks it unaware that it is the same drink. Prerna takes Anurag with her as she wants to talk with him. Sonalika sees Prerna drinking the spiked drink and is happy as she will be out of control and it will be easy to kidnap her.

Sonalika signs Ronit and tells him to leave the Basu house as Anurag suspects him. Sonalika tells Ronit that he should hire another goon and get Prerna kidnapped. Anurag tells Prerna that he remembered that he had promised that he will always support her. Anurag tells that she was going to marry someone but he tried to stop her from getting married. Prerna gets emotional.

In the precap, Prerna tells Anurag that she wants to tell her something and tells that she loves him and they hug each other. Viraj comes and sees them together.