Kathmandu Connection is streaming on SonyLIV from today. The series stars Amit Sial, Gopal Datt, Aksha Pardasany, Anshumaan Pushkar and others. Taking off after the serial Bombay blasts of 1993, it's an investigative thriller which has several twists and turns but falls short of being an exciting, nail-biting series. 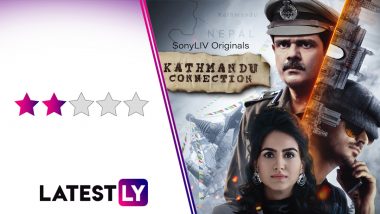 Kathmandu Connection review: Bombay serial blasts of 1993 is still fresh in the minds of many who lived through it. The dread, the fear, the investigation that followed have all been witnessed by people. Kathmandu Connection attempts to draw your attention to what happened before and after the blasts. Directed by Sachin Pathak, the series is a snack watch with just six episodes and enough twists and turns. But it falls short of being a rousing expose on the blasts because of its lackadaisical execution.  Kathmandu Connection Trailer: Amit Sial’s Sony LIV Show Looks like an Enticing Crime Thriller to Binge-Watch (Watch Video)

Samarth Kaushik (Amit Sial) guns down two suspected terrorists in 1990 New Delhi and wins a promotion. The encounter seemed quite shady as the cops just open fired at the two men. Three years later, Mumbai has been rocked by serial blasts and an investigation is on. But nothing seems the usual because the investigating officer gets murdered, a TV journalist Shivani Bhatnagar (Aksha Pardasany) starts getting strange calls from a casino in Kathmandu, a hotelier is kidnapped, rescued and then murdered, a rising mafia man and casino owner Sunny Sharma (Anshuman Pushkar) becomes an eyesore of his own mentor Mirza Beg (Zakir Hussain). Samarth decides to follow a lead, gets suspended for a botched-up investigation but continues to work on the case. Does he manage to unearth the conspiracy? That's what the series is all about.

Written by Siddharth Mishra, Kathmandu Connection packs all the tropes of a typical investigation series with real-life incidents in the backdrop. There's a Dawood look-a-like whose face is kept away from the audience, a shady encounter job, a brain-washed youth, a wrong target, some revenge, and all other cliches. But what's interesting is that nothing is forcibly stashed in the narrative. It smoothly moves from one to another without overwhelming you. They aren't there just to give you thrills but are an integral part of the investigation and what unfolded due to it.

Another fascinating part of storytelling here is you can't take anyone's side. Everyone has grey shades. Samarth Kaushik's deepest and desperate desire to prove his worth forces him to do unlawful things at times, so despite him chasing the person responsible for the blasts, you can't fully be on his side. The same goes for Sunny Sharma. He is a goon, a don who kills whimsically, and yet he has a story you wouldn't mind listening to. Characters have been written really well. So pointless dwelling on their backstories has been avoided and I am so glad. Controlled indulgence can also make a good series, Kathmandu Connection is an example of that. A Simple Murder Review: Dark Humour Rules in Mohammed Zeeshan Ayyub-Priya Anand’s Web Series With Terrific Turns From Sushant Singh and Amit Sial! (LatestLY Exclusive)

Check out the trailer of Kathmandu Connection

But it isn't without its flaws. While there are enough highs and lows, the extremely sluggish pace of the thriller gets to you after a while. It's as if nothing is moving in front of you. Even when you can predict what to expect next, you wouldn't bother because it just makes you equally lazy to use your head. An investigative thriller needs to have some pace, it can't be a drag. There's a severe lack of enthusiasm in the rhythm and hardly has any mystery element.

Also, there are several technical and continuity flaws, one of them being a dead body changing its position when the same scene is shown at two different points in the story. There's also a scene that looks like those night sequences in Rohit Shetty films that are shot in the day.

Performances are the clincher here. Amit Sial is obviously a pro at such sequences. But my grouse is the scene where he confesses his love, has not been maturely written. It comes across as creepy rather than convincing. You know it's not what it seems even when Sial tries his best to deliver it well. Anshuman Pushkar is the highlight here as his mood swings are simply fascinating to watch. He switches between being a stalker lover-boy to a don with such ease. He never lets the character slip which adds the much-needed charm to the series.

Kathmandu Connection doesn't add anything new to the crime investigative thriller genre, but it does have its moments. The series streams on SonyLIV.

(The above story first appeared on LatestLY on Apr 23, 2021 09:00 AM IST. For more news and updates on politics, world, sports, entertainment and lifestyle, log on to our website latestly.com).