The weekly data of BARC for the period of September 26, 2020 to October 2, 2020 are out. We have usual suspects like Kundali Bhagya (Zee TV), Saath Nibhana Saathiya (Star Utsav), Kumkum Bhagya (Zee TV) and Anupamaa (Star Maa), along with Taarak Mehta Ka Ooltah Chashmah (SAB TV) roosting in the top slots. 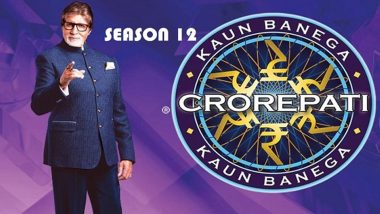 The popular quiz show, hosted by Amitabh Bachchan, is considered as one of the most beloved reality shows on the small screen. Yes, the initial gloss has managed to fade over, but Amitabh Bachchan's huge stature and fan following he commands kept KBC in the running for years. KBC 12 began airing on September 28, 2020 on Sony Entertainment Television channel. Though another programme on the same channel - India's Best Dancer - made it to the top rankings, KBC 12 couldn't do so. Taarak Mehta Ka Ooltah Chashmah Among the Top Five Shows With Best TRP Ratings, Kundali Bhagya Retains the Number One Spot.

Let's look at five reasons why Big B couldn't power the show to top rankings.

The biggest problem for KBC 12 is the postponement of IPL, which usually happens in April-May. Thanks to the pandemic, the matches are now shifted to this time of the year, and evening matches are played around the same time when KBC airs (9 pm slot), thus capturing many of the viewers. With Bigg Boss 14 also begun to air from October 13, it looks like KBC 12 is going to have a tough road ahead. Kaun Banega Crorepati 12: The Correct Answer to Rs 25 Lakh Question that Sonu Kumar Gupta Couldn't Answer.

This is disappointing but we have to face the uncomfortable truth. While there is still affection for KBC among its true fans, most of the viewer base are more interested in reality shows that display talents (dance reality shows) or that offer voyeuristic pleasures (Bigg Boss). The love for increasing your general knowledge is now confined to a few. Even the buzz surrounding KBC 12 is pretty low compared to other years, though it is the first show hosted by a major star to start airing during the pandemic.

This is less a reason but more a probable factor. Bollywood has been in a bad place in the last few months thanks to the whole Sushant Singh Rajput controversy, and the news channels vilifying many of the top stars. The Bachchan family themselves have under fire, mainly after actress-MP Jaya Bachchan supported the industry in the assembly in the face of drug abuse allegations. So did the haters' anger towards the Bachchan family (though Big B was expectedly quiet about the whole controversy) ended up with viewers boycotting the show? Maybe. Or maybe there could another more guileless reason...

Kaun Banega Crorepati is not only airing on SET, but also on SonyLIV. OTT Platform Views won't be considered by BARC. We are also not sure if they consider views from people who watch the show from Jio TV. So there is a chance that KBC 12 has not lost its fanbase, they just switched platforms. Also since KBC 12 began two days after the start of the evaluation week, maybe that's also affected its ranking.

Okay, this is less a reason but more a dig. But seeing the Mumbai Police commissioner's presscon today revealing how a couple of channels have been buying TRPs to boost their rankings, we wonder how many more such channels are doing so, and if there is any meat in how other shows are doing so good. This is like cricket betting scandal all over - we will keep doubting which match is fixed and which match isn't!

(The above story first appeared on LatestLY on Oct 08, 2020 08:49 PM IST. For more news and updates on politics, world, sports, entertainment and lifestyle, log on to our website latestly.com).