Taarak Mehta Ka Ooltah Chashmah has managed to secure the third position in the list of top five shows with best TRP ratings. 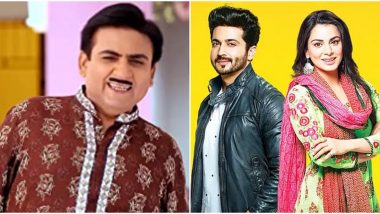 This week's TRP ratings are out and Taarak Mehta Ka Ooltah Chashmah has managed to enter the list of top 5 shows. The show's ratings had slipped down last week but the recent coronavirus track on the show has managed to interest the audiences and that ultimately has helped it score good TRP numbers. The show has managed to come in at third position and is expected to stay in the top 5 considering the popularity of its recent track among the audiences. Taarak Mehta Ka Ooltah Chashmah Producer Asit Kumarr Modi Opens Up On Neha Mehta Aka Anjali's Exit From The SAB TV Sitcom.

Shraddha Arya and Dheeraj Dhoopar's Kundali Bhagya has managed to secure the numero uno position once again. It's been two months since the show has secured number one position in the weekly TRP charts and it continues to enjoy all the audience support courtesy the storyline that filled with interesting twists and turns. Sriti Jha's Kumkum Bhagya, however, saw a decline in its ratings and managed to earn the fourth position in this week's list.

Following Kundali Bhagya is Rupali Ganguly's Anupamaa at number two position. The show deals with the subject of women empowerment and for the ones who don't know, there's a similar show going on in the Marathi language with the title, Aai Kuthe Kay Karte. Taarak Mehta Ka Ooltah Chashmah Completes 3000 Episodes, Here's What Producer Asit Kumar Modi Has To Say.

Malaika Arora, Geeta Kapur and Terence Lewis' dance reality show, India's Best Dancer has managed to secure the fifth position in this week's TRP rating chart. Credit Malaika's COVID-19 negative test result or the entire episode where a morphed video of Terence touching Nora's butt went viral, but the show did manage to grab quite a few headlines and this may have affected its TRP ratings for good.

(The above story first appeared on LatestLY on Oct 08, 2020 05:52 PM IST. For more news and updates on politics, world, sports, entertainment and lifestyle, log on to our website latestly.com).