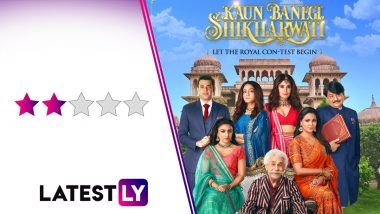 Raja Mrityunjay (Naseeruddin Shah) is that cuckoo royal who is still stuck in his past and in his dusty haveli, till tax troubles worth crores come ringing home. On the advice of his confidante Mishraji (Raghubir Yadav), he decides to choose his heir on whom he can dump all his financial woes. The trouble is his four daughters are now estranged from him, and also from each other. The reason being, unable to cope with the loss of his wife and in trying to make them do so, he had coerced to compete with each other over silly tasks, which made them end up hating their father and each other when they turned adults.

The eldest daughter Devyani (Lara Dutta) is a socialite whose husband (Cyrus Sahukar) is seeing heavy losses in his business making them bankrupt. The second daughter Gayatri (Soha Ali Khan) is a danseuse and kind of a recluse, living in her ashram with her two adopted kids. The third daughter Kamini (Kritika Kamra) is an air-headed, vain Insta influencer, whose reputation takes a hit following a social media disaster. The youngest daughter Uma (Anya Singh) is a game developer, who has anxiety issues and allergies that prevent her from getting funding for her team.

So when they find out that Raja Mrityunjay is looking for the next heir in them, they decide to visit their old home seeing this as a way to save them from their financial and emotional woes. But Raja has a different plan to choose the his heir - once again, he makes them compete for nine tasks and the winner would be the next king of Shikharwati.

Reading the above premise and seeing the cast the series has roped into play to play the lead roles, you would expect Kaun Banegi Shikharwati to be a silly but fun series. The idea to make the girls compete with each other in very inane tasks (like cooking and making villagers laugh), riffing at our obsession with reality shows, might sound a nice one on paper, especially when 2021 was ruled by our obsession for The Squid Game. That's the problem, here, though. Apart from a couple of scattered moments, Kaun Banegi Shikharwati doesn't become fun or funny, with most of the gags and jokes just about passing muster, despite the best efforts of most of the cast.

The only times I really feel engaged to the show is when it got into emotional bonding, when the siblings are trying to rediscover their lost sisterhood, or the rare moments of solidarity they lent to each other. I really like the scene where the Raja, in a surprising out-of-character moment, empathises with his second daughter on the emotional turmoil of being a single parent. I just wish there were more scenes like this, instead of incessant buffoonery that doesn't even turn remotely funny. LATESTLY Exclusive! Soha Ali Khan On Working With Naseeruddin Shah: Legends Like Him Don't Try To Teach, They Tell Stories!

The actors do the best with what they can, though only a few manage to leave a mark. Lara Dutta brings a lot of spunk into her role - she is sassy, she is headstrong and she draws in a lot of charisma. I really loved Kritika Kamra's performance. Some may find her act annoying, but then that's what her character is and the fact this it is her arc you end up most interested in seeing her growth, including her attraction for a level-headed villager Veer Singh (Anurag Sinha), has a lot to do with her performance. Another scene-stealer is Padma (Alisha Khare), Gayatri's daughter, who speaks in a robotic voice, but is the most far-seeing of the bunch, despite her age. Cyrus Sahukar is his usual self, but Varun Thakur, the popular standup comedian, here playing the Shikharwat's family friend with an agenda of his own, doesn't register much of an impact.

As for Shah and Yadav, the former is surprisingly unimpactful in most of the scenes, while the latter fares better.

- Not Funny As Expected

- Predictable After a Point

(The above story first appeared on LatestLY on Jan 07, 2022 12:47 PM IST. For more news and updates on politics, world, sports, entertainment and lifestyle, log on to our website latestly.com).