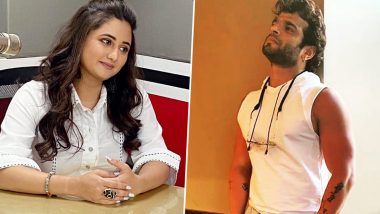 Khatron Ke Khiladi 10 will be shooting for its finale episode today at Filmcity in Mumbai. And while that show progresses, there have been some major changes in the line up of Khatron Ke Khiladi Reloaded. There were reports of how the makers had asked Karan Patel but he had refused the offer for KKK Reloaded because of his commitments to Kasautii Zindagii Kay 2 as Rishab Bajaj. However, looks like after some changes, Karan Patel is in and Rashami Desai is out of the show. Khatron Ke Khiladi Special Edition: Hina Khan Opts Out Due To 'Safety Reasons', Sidharth Shukla Was Never Approached (Deets Inside).

A source close to the development told SpotboyE that Rashami had to back out because of personal reasons. "Rashami was in discussion but due to some personal reasons she would not be able to participate this time." And the report read that Karan had also finally given the nod for the show. Khatron Ke Khiladi Reloaded: Jay Bhanushali Moves Out Of Home To Resume Shoot and Avoid Risking Family's Health (Deets Inside).

The final line up of the Reloaded version of Fear Factor now includes names like Karan Patel, Karan Wahi, Rithvik Dhanjani, Nia Sharma, Jasmin Bhasin, Aly Goni, Harsh Limbachiyaa and Jay Bhanushali. There were rumours of Hina Khan and Sidharth Shukla also being a part of the show but turns out that Hina had refused to participate and Sidharth was never approached.

(The above story first appeared on LatestLY on Jul 21, 2020 04:07 PM IST. For more news and updates on politics, world, sports, entertainment and lifestyle, log on to our website latestly.com).