Legends Of The Ramayana With Amish Review: The Discovery+ Show's Attempt At Humanising The Epic Is Both Mystical And Informative (LatestLY Exclusive 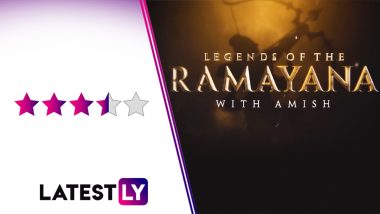 Legends Of Ramayana With Amish ratings

Legends Of The Ramyana With Amish Review: What is Ramayan? Fact or fiction? Many in India believe Lord Rama actually walked this land and blessed the world with his grace. From the time we were kids, we have been told the story of Lord Rama and Demon Ravana as a story of Dharma winning over Adharma, good defeating evil. But it's almost cruel to look at the epic from the lens of just religion because Ramayana is more than just that. Discovery+ show Legends Of Ramayana with Amish attempts to address the same and manages it well. Fact Check: Video of Jatayu Bird From Ramayana Spotted in Kerala is Fake! Know Truth About Viral Clip of Andean Condor.

Amish Tripathi, one of the bestselling authors of India, is the narrator here and he takes us on a ride of Ramayana. He peels the the epic layer by layer from even before Ram's birth to Sita's agni-pariksha (test by the fire). The systemic deconstruction of the legend as told by several religious texts makes it a great watch. The three-episode series doesn't over-dramatise any of the moments in the story and that works in capturing the essence of it all. Co-directors Sujatha Kulshreshtha and Abhimanyu Tewari have kept the drama confined to mythology only.

What's so invigorating is the revelations of certain unknown facts about Ramayana. Who knew that Gautam Buddha and Lord Rama belonged to the same dynasty or the fact that Ram had an elder sister in Shanta or Nashik gets its name from Suparnakha. In fact, not many know that Queen Kaikeyi had gifted Ram and Sita a palace post their wedding. Haven't we brought up to believe Maa Kaikeyi is an evil mother? Several such myths are busted here!

Amish speaks to expert geologists, archeologists, historian and many such intellectual brains to reveal a lot of unknown facts about Ramayana. That humanises the text and the characters. It hypes Valmiki's art of storytelling justly and also includes Lanka in the story. It's difficult to not to demonise Ravana when he did what he did, but Kulshreshtha, who also holds the writer's credits, does respect the brilliant mind that he had. How he made Lanka prosperous is explained as well.

While we don't really have a flaw to point out here as the series unravels very neatly and without any glitch as such, the episodes seem a bit rushed. There's plenty of information here but all are very hurriedly explained. Probably, adding two more episodes would have helped us grasp them better. For instance, the series talks about natives of Lanka's perception of Bibhishan, Ravana and even Sita but it doesn't delve into their opinion about Lord Ram. The person who defeated their mighty King and brought down their entire kingdom, they surely would have some POV there. The Perfect Planet Review: David Attenborough's Brisk Narration And Jaw-Dropping Camerawork Make This Docu-Series A Must Watch (LatestLY Exclusive).

Watch the trailer of Legends Of Ramayana With Amish:

(The above story first appeared on LatestLY on Apr 05, 2022 07:09 PM IST. For more news and updates on politics, world, sports, entertainment and lifestyle, log on to our website latestly.com).