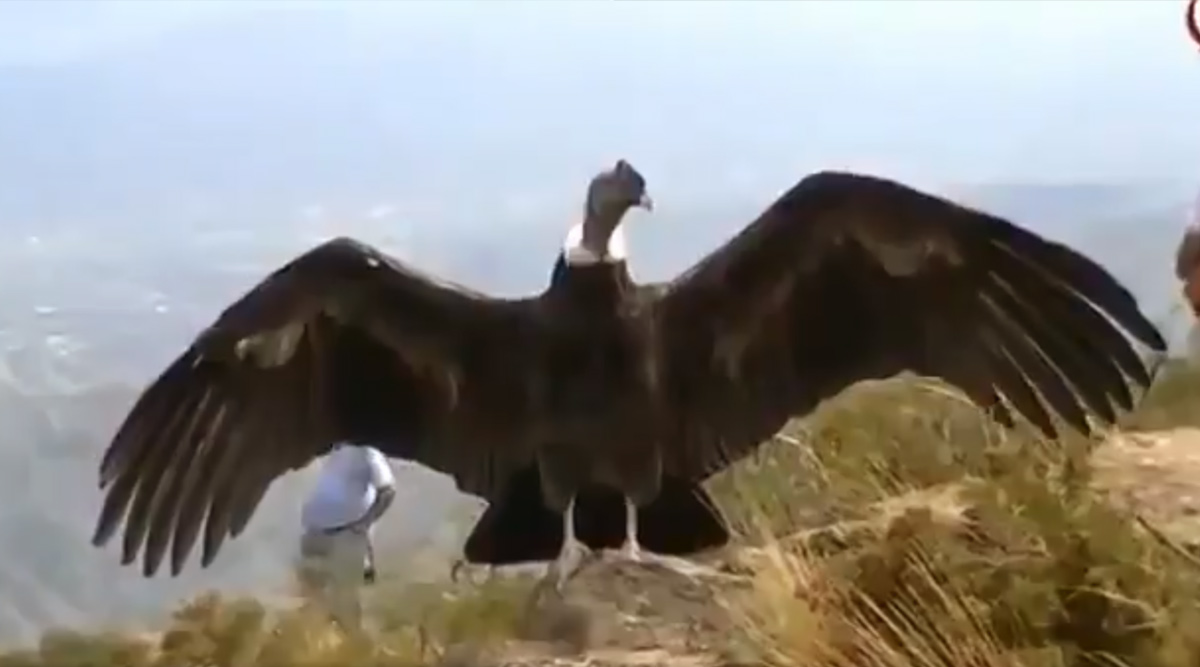 Heard of Jatayu, the mythical bird from Ramayana? Now a video has been going viral on social media which claims a real Jatayu was spotted at a forest in Kerala. The video shows a large bird with his wings spread wide, standing at the edge of a mountain. According to the caption of this viral clip, this bird was spotted at the same forest where the Jatayu Nature Park is located in Kerala's Kollam district. But while the video is true, it is not from Kerala but Argentina. The original video is of a bird called Andean Condor which was rescued back in the year 2014 in Argentina. Fact Check: Konark Sun Temple’s Exotic Carvings Replaced? ASI Responds to Twitter Users Claim of Historic Sculptures Restored With Plain Stones.

Several Twitter accounts have shared the video on their timelines and the caption reads, "JATAYU, a Divine Bird of #Ramayana is very rarely seen. Recently the bird was sighted at Sadayamangalam forest in #Kerala where is a Jatayu Park. See this majestic Bird & its beautiful wingspan." It is actually an old video which had gone viral back in 2019 as well, with the same claim of the bird being spotted in Kerala's region of the Jatayu park.

The original video is from an incidence in 2012, where an Andean Condor (vulture species) was found poisoned at Catamarca. The bird was found in a dying condition, so it was sent to Buenos Aires zoo for treatment. The video is from the time when the bird was freed into its natural environment after complete recovery in the year 2014.

Here's The Original Video From Argentina:

The bird above is Andean Condor which is found mainly in the Andes mountain range of South America. It is among the largest flying birds and has a wingspan upto 3.2 metres.

Jatayu Park in Kerala:  Jatayu Earth’s Center, also known as Jatayu Nature Park or Jatayu Rock, is a popular tourist spot at Chadayamangalam in Kollam district of Kerala. At an altitude of 350m (1200ft) above sea level it has the world's largest bird sculpture. It is about (200 feet (61 m) long, 150 feet (46 m) broad, 70 feet (21 m) in height. The legend of Ramayana states, Jatayu fought with Ravana while he was taking away Sita. But Jatayu could not withstand as he was very old. Rama and Lakshmana while searching for Sita saw Jatayu, who then informed them of the fight between him and Ravana and tells them that Ravana had headed South. In his honour, the sculpture is built here.

It's an old video from Argentina.