#MeToo: Anu Malik Steps Down From Indian Idol 11 After Sony TV Receives A Letter From National Commission For Women

The Indian Idol 11 judge has stepped down once again from his position on the show owing to the growing Me Too accusations on him after the channel was sent a letter by the National Commission for Women. 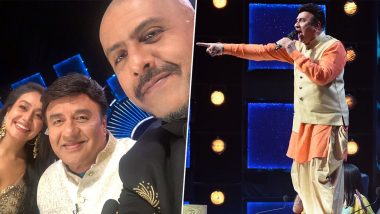 In a shocking turn of events, Indian Idol 11 judge Anu Malik who has been in the eye of the storm for the past week or so, stepped down voluntarily this evening. Sources close to the show have confirmed that 'Anu's decision was a very sudden one and nobody even had the slightest idea that the music composer will take this step'. It all started with singer Neha Bhasin recounting her experience with Malik and how he had 'made a move on her when she was 21'. Singer Sona Mohapatra who has been been very vocal about her displeasure with Sony TV for reinstating Anu Malik as the judge again, after he was removed from the last season of the show after the first accusation of Me Too was filed on the singer. #MeToo: Sona Mohapatra Slams Sony Television for Retaining Anu Malik as the Judge of Indian Idol 11

Ever since Anu was brought back as the judge for season 11, Sona Mohapatra has been tweeting about the singer and his misdemeanours. Last week, in an open letter, Anu Malik had addressed the rumours and stated that he will have to 'knock on the doors of the courts to safeguard' himself. He also mentioned in his letter that all the accusations placed on him were false and unverified and that he was being cornered and suffocated.

And now, fresh reports have emerged that Anu Malik stepped down from the judge's seat of the singing reality show, leaving the makers in a lurch running around trying to find Anu's replacement. Confirming the news of him backing out from the show, Anu told Bombay Times, "I have taken this decision voluntarily.I want to take a three-week break from the show and get back to it only after I have cleared my name." #MeToo: Anu Malik Finally Speaks Up on the Molestation Charges on Him, to Seek Legal Action Against the Accusers (View Post)

The whole Sona Mohapatra-Anu Malik saga has now reached the National Commission for Women who took notice of Sona Mohapatra's open letter to Smriti Irani and sent a notice to the channel.

Read Sona's Letter and the NCW's Letter Below:

@NCWIndia has taken Suo-motu cognizance of this matter and send a notice to Sony Entertainment Television @sharmarekha @MinistryWCD @PMOIndia pic.twitter.com/gTUStj9ixC

Elaborating on what he plans to do moving forward, Anu told the daily, "I have taken this decision voluntarily. While the channel has been supportive, it’s solely my decision to take this break. All I want to say is that before jumping to a conclusion, it’s important to hear the other side as well. I have requested the Music Composers Association of India to forward my letter (that he wrote to them) to the Singers Association of India (SAI), asking them to come and explain themselves."

(The above story first appeared on LatestLY on Nov 21, 2019 07:24 PM IST. For more news and updates on politics, world, sports, entertainment and lifestyle, log on to our website latestly.com).