Singer Sona Mohapatra who's always targeted for speaking her mind and standing up against the wrong has now written an open letter to Sony Television for reinstating Anu Malik as their Indin Idol 10 judge. 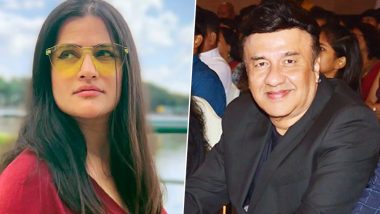 Sona Mohapatra and Anu Malik (Photo Credits: Facebook)
Sona Mohapatra is enraged and furious for right reasons. The singer who's always targeted for speaking her mind and standing up against the wrong has now written an open letter to Sony Television for reinstating Anu Malik as their Indian Idol 11 judge. The music composer was one of the many accused in the #MeToo wave that had hit Bollywood industry last year. While Malik was temporarily sidelined from all his appearances and humiliated for a couple of days, he's back as a co-judge of this new season with Neha Kakkar and Vishal Dadlani. Nakuul Mehta and Sona Mohapatra Get into a Twitter Argument over Shahid Kapoor’s Kabir Singh
Earlier in the day, singer Neha Bhasin had shared details of her traumatic experiences, courtesy Anu Malik. She revealed how he tried kissing her during one of their meetings and didn't even hesitate to call him an ugly pervert. Sona, if no one else, is quite shaken after hearing Bhasin's story and has slammed Sony TV, Sonu Nigam, Vishal Dadlani, Neha Kakkar and others for not taking a stand and supporting the accused instead. She has called out the producers for having double standards of extending their support in the west but not giving a damn about the same in the east. #MeToo: Singer Neha Bhasin Calls Indian Idol Judge Anu Malik A 'Predator', Alleges He Made A Move On Her When She Was 21 (Read Full Story)
Check Out Her Tweet Below:

While the #MeToo movement in India was short-lived, many prominent names including Alok Nath, Vikas Bahl, Kailash Kher, Sajid Khan and even Subhash Ghai were called out during its short duration. Severe sexual allegations were hurled against them but very few seem to have been affected by its aftermath. Sona Mohapatra is clearly determined to continue with her fight and knowing her, we know she will.

(The above story first appeared on LatestLY on Oct 31, 2019 05:53 PM IST. For more news and updates on politics, world, sports, entertainment and lifestyle, log on to our website latestly.com).