Mismatched is a upcoming campus drama is something that every young adult would completely relate to. It revolves around friendships, romance, career, marriage pressure and a lot more. 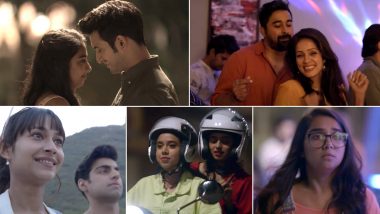 Prajakta Koli and Rohit Saraf, are the brilliant actors whose notable works include, Khayali Pulao and The Sky is Pink, respectively. These young, talented actors have teamed up for Netflix’s Original series titled Mismatched and we must say, they are a perfect match for this new show. This upcoming campus drama is something that every young adult would completely relate to. It revolves around friendships, romance, career, marriage pressure and a lot more. OTT Releases Of The Week: Angad Bedi's MUMBhai on Zee5, Keerthy Suresh's Miss India on Netflix, Mark McKenna's Wayne on Amazon Prime and More.

Rishi (Rohit Saraf), a young lad who believes in 60s waala romance, is searching for his happily ever after, whereas Dimple (Prajakta Koli) dreams of being a tech wizard. The opening of the trailer shows how the latter wants to study java, want to do a PhD and make apps. However, her parents want their daughter to get married and settle in life. Rishi and Dimple meet in college. These two are poles apart, who want different things from life. Their choices, when it comes to career, and their ideas of companionship differ. But destiny has something else in store for the two of them. Victoria and David Beckham Seal £16M Deal for Upcoming Netflix Documentary Series Which Will Have Unseen Footage of the Star Couple’s Life.

Watch The Trailer Of Mismatched Below:

Mismatched is directed by Akarsh Khurana and Nipun Dharmadhikari. The show will also feature Vihaan Samat, Taaruk Raina, Kritika Bharadwaj, Rannvijay Singha, Muskkaan Jaferi, Devyani Shorey and Abhinav Sharma in key roles. Mismatched is all set to be premiered on Netflix from November 20.

(The above story first appeared on LatestLY on Nov 06, 2020 02:43 PM IST. For more news and updates on politics, world, sports, entertainment and lifestyle, log on to our website latestly.com).