Naagin 4: Akanksha Puri Reveals That She Was Approached For Rashami Desai's Naagin 4 Role Shalaka (Deets Inside)

Rashami entered the show after the one year leap that it took recently. And ever since the actress' entry, her fans have lauded Rashami's performance on the show. The show was recently in the news for rumours of Sidharth Shukla having been roped in for the show opposite Desai, but he refuted the reports. 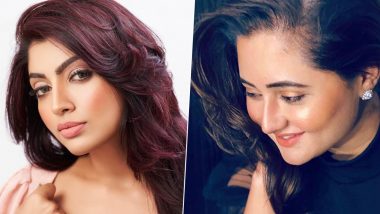 Looks like the makers of Ekta Kapoor's Naagin 4 had approached a lot of popular names before Rashami Desai gave the nod for playing Jasmin Bhasin's character Nayantara/Shalaka in the Nia Sharma-Vijayendra Kumeria starrer. A few days back, there was news of how Mahira had been first approached for the show but she had rejected the offer. Mahira, who was also a part of Naagin 3, had apparently refused the offer because she wanted to focus more on individual projects like music videos. Naagin 4: Sidharth Shukla Refutes Reports of Entering Ekta Kapoor's Supernatural Show Opposite Dil Se Dil Tak Co-Star Rashami Desai.

Rashami entered the show as Nayantara, but with a new face who is brought back from the dead by Vishakha, who wants to get Brinda out of her life. Vishakha and Nayantara join hands against Brinda. Nayantara takes the identity of Shalaka and enters Dev's life as his wife, with one and one motive alone- to separate Dev and Brinda and kill the latter. Naagin 4: Rashami Desai Looks Resplendent in Her Bridal Look For The Show (View Pics).

However, in a conversation with India Forums, Akanksha revealed that Balaji had approached her also for the role of Shalaka. "Yes when I got a call from Balaji they told me about this new track, they didn’t tell me they are planning to replace anyone, I asked them that they already have jasmine and frankly they nowhere even gave me a hint that it’s about replacing someone and I also took it lightly as the show already had two strong names. How will they have a third as the parallel lead, they didn’t reveal anything over the phone and told me to come to the office and talk to them face to face," said Akanksha. Akanksha Puri Threatens Legal Action Against Ex-Boyfriend Paras Chhabra and Producers For Using Her Name on Mujhse Shaadi Karoge (Deets Inside).

Also, what played spoilsport was the fact that the makers had wanted someone who could begin shooting almost immediately and Akanksha is already playing Parvati in Sony TV's Vighnaharta Ganesh. She told the portal, "They wanted to shoot after three or four days itself and they clearly told me they have few names in mind and have to lock someone asap. I told them even if I leave my show I have to serve 30 days to notice period and if I shoot with Parvati I can give max twelve days a month but their requirement was for a minimum of 20 to 25 days."

"Things didn't work out. But I would love to do something like this in the future and I am looking forward to work for Balaji. Also, I feel lucky that they at least considered me for this role and I have seen Rashami, she looks stunning and is doing a fabulous job !! She is the perfect choice for Naagin," concluded Akanksha.

Rashami entered the show after the one year leap that it took recently. And ever since the actress' entry, her fans have lauded Rashami's performance on the show. The show was recently in the news for rumours of Sidharth Shukla having been roped in for the show opposite Desai, but he refuted the reports.

(The above story first appeared on LatestLY on Mar 27, 2020 03:13 PM IST. For more news and updates on politics, world, sports, entertainment and lifestyle, log on to our website latestly.com).