The fantastic ARMY has spotted the names of BTS members on the characters in Our Blues. So there's Kim Taehyung, Jeon Jungkook, Min Yoongi, Jung Hoseok and Park Jimin too. Our Blues streams on Netflix 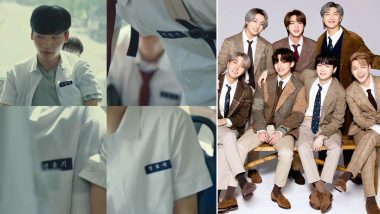 BTS; A scene from Kdrama Our Blues (Photo credit: Twitter/Facebook)

We know that Jimin has sung the OST of Our Blues but we are yet to hear that. Hopefully it will happen soon. But ARMY has already spotted not just him but his entire BTS gang in the first episode of the drama. They are obviously crazy happy about it and more so because it was very unexpected. No, these aren't cameos but character names. The fantastic ARMY has spotted the names of BTS members on the characters in the show. So there's Kim Taehyung, Jeon Jungkook, Min Yoongi, Jung Hoseok and Park Jimin too. Our Blues: 5 Reasons Why The Kim Woo-bin, Shin Min-ah KDrama Shouldn't Be Missed.

There's a scene in the bus where a girl gets bullied by another girl for carrying an animal with her. The boys at the back all have those names on their badges. What an interesting and subtle way of including BTS in the story. BTS’ Jungkook Influences McDonald’s With Unique Instagram Username, See How Golden Arches Followed Golden Maknae’s Footsteps!.

The wait for Nam Joon ensues

Omg.. why does im feeling like almost all new kdramas director or writer is an ARMY? lemmeee hugggg u alllll omgg

The messiah is here for all those who can't read Korean

In the 1st episode of K-drama called “Our Blues” where Jimin will sing the OST for the drama, there were students of the names Jung Hoseok, Park Jimin, Min Yoongi, Jeon Jungkook, and Kim Taehyung 💜#JiminOSTlsComing #Jimin @BTS_twt

Bangtan is here...well in spirit!

in the kdrama "OUR BLUES " the first episode students name are of BTS..😍 JEON JUNGKOOK , MIN YOONGI , KIM TAEHYUNG and JUNG HOSEOK 😭😭 they literally bringing the Bangtan ig???? pic.twitter.com/t2wRuqmCKS

(The above story first appeared on LatestLY on Apr 11, 2022 07:18 PM IST. For more news and updates on politics, world, sports, entertainment and lifestyle, log on to our website latestly.com).