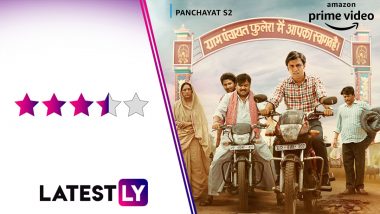 Panchayat Season 2 Review: Honestly speaking, there are only five Hindi OTT shows that made me wait eagerly for their second season. Two already arrived - Sacred Games (Netflix) and The Family Man (Amazon Prime Video). One is yet to be announced - Bandish Bandits (Amazon Prime Video), and one is, I heard, in production, Asur (Voot). And one more has now arrived on the platform - TVF's Panchayat on Amazon Prime. Now, while the second seasons of the already existing aforementioned series left me with mixed feelings, I am glad to say Panchayat Season 2 returns to the same excellent form, be it in writing, acting and direction, save towards the finale. Not to mention, effective use of subtle humour and unpredictably-landing emotional scenes. OTT Releases of the Week: Jitendra Kumar’s Panchayat Season 2 on Amazon Prime Video, Siddharth’s Escaype Live & Mohanlal’s 12th Man on Disney+ Hotstar and More.

When we see him in the new season, Abhishek Tripathi (Jitendra Kumar) has perched himself comfortably in his role of Panchayat Secretary of Phulera. His ambitions of cracking CAT still persists, but we wonder if his meeting of Rinky (now played by Sanvika), the daughter of Panchayat sarpanch Manju Devi (Neena Gupta) and Pradhan pati  Brij Bhushan Dubey (Raghubir Yadav) has anything to his new vigour. While I expected the second season to explore the romance, Panchayat season 2 surprised me by keeping me often on tenterhooks about the love story (or lack thereof) throughout. Just like with the suspicious acolytes Vikas (Chandan Roy) and Prahlad (Faisal Malik).

Instead, Abhishek is once again embroiled in solving Phulera's problems, or rather keeping them quiet. From building pakka roads, to sand mining, to de-addiction PSA's to installing CCTV cameras to even tackling open defecation, Abhishek and his groupie try to handle the developmental concerns, but not exactly always in the moralistic manner we expect such protagonists to act in similar fictional shows and movies. And yeah, despite the turn of events in the last episode of first season, Manju Devi is still content being at home, while her husband continues to administer on her behalf.

In between, Abhishek also faces minor existential crises about his own life in varying situations, like when a friend tells him of his crores-worth annual package or an arrogant MLA reminds him of his 'place'. He is also being accused of being partisan by a couple, Bhushan (Durgesh Kumar) and Kranti (Sunita Rajwar) both eyeing the Pradhan's seat in next elections, and thereby the season's antagonists. Funny part is that despite being positioned as the 'villains', it's hard to counter-argue with their points and accusations.

Otherwise, not much has changed much for Phulera's core team, and strangely, that works in favour of the show.

The USP of Panchayat, impressively directed by Deepak Kumar Mishra, as a series is its amazing ability to surprise and amuse us without the need to infuse exaggerated situations, while never letting go of its unassuming pace. It highlights the problems faced by many parts of our country, without letting go of its satire or taking an over serious tone, save for the surprisingly emotional finale. And at times, dropping some unexpected emotional truth bombs that do shake up the characters and the plot, but don't seek a sudden turnaround. Like for example, I wondered why the first episode of season 2 had the need to add a bawdy dance number in between, but the way the things work out after that dance sequence take an unusual and touching turn. The talented Chandan Roy, who also doubles up as the writer here, continues his fabulous double job with the new season, with some very smart and ingenious use of parallels, like in an episode where Abhishek accuses Brij Mohan of not being a good friend, the show brings in a snake! Panchayat Review: Jitendra Kumar, Raghubir Yadav, Neena Gupta Spell Magic With Their Performances in the TVF Show With a Refreshing Take on Rural Life.

Personally, my favourite episode is the one with the CCTV cameras, it was the funniest of the lot (not that the other weren't comic), and it was enjoyable to see the 'chappal wars' between the Pradhans-Abhisek and Bhushan-Kranti. The backbone of the show still continues to be the appealing bonding between Abhishek, Brij Mohan, Vikas and Prahlad, which leads to some of the season's best moments.

The performances are top-notch like last season, with Jitendra Kumar, Raghubir Yadav, Neena Gupta, Chandan Roy and Faisal Shaikh all perfectly playing up their roles. If Chandan Roy was the scene-stealer of last season, I believe Faisal Shaikh to take that post this season. Newcomer Sanvikaa also fits in her role well, while the actors in the supporting cast are so well-cast.

Any downer? While I was taken aback by a tragic incident that happens in the finale and some of the dialogues and performances are strong there, I feel there is some familiarity about the proceedings. Also, it lacks the punch of the first season's finale, and doesn't exactly tie up some of the created plot strands.

- The Acting, Writing, Humour and the Direction

- The Finale is Effective in Its Emotionality, But Feels Weaker

While I am in somewhat two minds about the last episode, there is no doubt that Panchayat Season 2 is a majorly faithful followup to an excellent first season, be it terms of acting, direction and performances. With a couple of intriguing plot setups established in the last episode, Panchayat 2 leaves me eagerly waiting for the return of Phulera's ragtag team back in season 3. The series is streaming on Amazon Prime Video.

(The above story first appeared on LatestLY on May 19, 2022 03:27 PM IST. For more news and updates on politics, world, sports, entertainment and lifestyle, log on to our website latestly.com).