Rajan Shahi's Director's Kut Productions won a plethora of awards at the Dadaaheb Phalke Awards 2020 that took place on November 24. Yeh Rishta Kya Kehlata Hai and Anupamaa sweeped up quite a few trophies in prestigious categories. 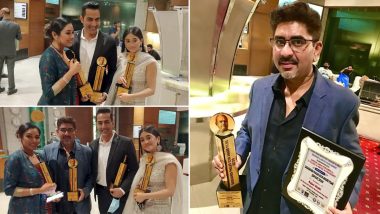 Dadasaheb Phalke Awards 2020 took place on November 24, albeit, on a much smaller scale than usual. However, it definitely did not matter to Rajan Shahi's Director's Kut Productions that won a plethora of awards for their work on television. With shows like Yeh Rishta Kya Kehlata Hai and Anupamaa, Rajan Shahi and his unit at Director's Kut Production have won the audience's hearts with their heartwarming storylines. BARC Report: Rupali Ganguly - Sudhanshu Pandey's Anupamaa Tops The TRP List, Takes Over Shraddha Arya - Dheeraj Dhoopar's Kundali Bhagya (View Ratings).

The producer and his team were felicitated at the Dadasaheb Phalke Awards 2020 at the event held on November 24. While Director's Kut Production won the Best Production House 2020, Shivangi Joshi and Mohsin Khan, who play the lead roles of Naira and Karrtik in Yeh Rishta Kya Kehlata Hai respectively, were given the Most Iconic Jodi 2020 award at the event. Rupali Ganguly Is Overwhelmed After Anupamaa Tops the TRP Charts, Says ‘Divine Power Has Blessed This Show’.

Rjan Shahi's drama Anupamaa, which was launched in July this year, also won two awards. The lead actress Rupali Ganguly was given the Popular Icon 2020 award, and Sudhanshu Pandey, the male lead of the show, was awarded the Dynamic Actor 2020 award.

Rajan Shahi took to Instagram to thank the audience for their love and support, and wrote, "”DADASAHEB PHALKE ICON AWARDS 2020.”

We thank the entire team of #directorskutproduction, cast and crew of #yehrishtakyakehlata, and #anupamaa for their hard work and without whom this wouldn’t be possible. Heartiest gratitude to the audience for their lovely support."

While Yeh Rishta Kya Kehlata Hai, has been ruling the audience's hearts for 11 years now, Anupamaa, even though recently launched, has been topping TRP charts for the past few weeks now with gripping drama. Heartiest congratulations to Rajan Shahi and DKP.

(The above story first appeared on LatestLY on Nov 26, 2020 10:17 AM IST. For more news and updates on politics, world, sports, entertainment and lifestyle, log on to our website latestly.com).