Ramayan: Ramanand Sagar's Mythological Serial Returns to TV on Public Demand; Here’s Where and When to Watch the Epic Show in Month of Rama Navami

Ramanand Sagar's Ramayan is being aired once again especially in the auspicious month of Ram Navami and fans can catch the epic show daily on Star Bharat from 7 PM every day. The channel's official Twitter handle informed fans. 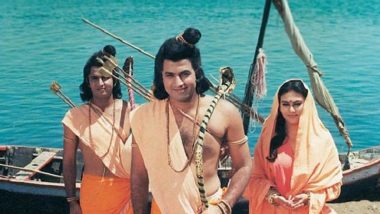 Ramanand Sagar's Ramayan is one of the most loved Television classic ever made and the Arun Govil, Deepika Chikhalia's show setting world record for being the most-watched show globally is proof of it. After 33 long years, Ramayan was retelecasted on the Doordarshan channel after 33 long years and with no surprises that it set viewership records worldwide, the show becomes the most-watched entertainment show in the world with 7.7 crore viewers on the 16th of April last year. Now it is the auspicious month of Ram Navami and fans can catch the epic show daily on Star Bharat from 7 PM every day. The channel's official Twitter handle informed fans. Ramayan Actors Arun Govil and Dipika Chikhlia Wish to Seek Royalty after Their Mythological Show Sets a New TRP Record.

The second wave of COVID-19 has forced lockdown and night curfew in most parts of India and watching Ramanand Sagar's Ramayan with your family might just make most of the show fans nostalgic yet again. Who knows, this time it may set some new records. Also, the auspicious month of Ram Navami makes it a perfect time of bringing this epic show back to TV.. Earlier, Ramayan stars Dipika Chikhlia, Arun Govil and Ramanand Sagar's son Moti Sagar spoke on how the show's lead cast deserve some royalty compensation after the show's massive success lately. Ramayan vs MASH – Who Actually Holds The Record Of Being ‘The Most Watched Entertainment Show’ in the World?

Ramanand Sagar's Ramayan Is Back on Star Bharat

Ramanand Sagar Ramayan consists of a total of 78 episodes of this mythological show is based on Valmiki's Ramayana and Tulsidas' Ramcharitmanas. The serial was first telecasted from January 25, 1987, to July 31, 1988, Every Sunday at 9.30 AM on DD Channel. Watch Ramayan with your loved ones daily only on Star Bharat from 7 PM onwards.

(The above story first appeared on LatestLY on Apr 14, 2021 07:05 PM IST. For more news and updates on politics, world, sports, entertainment and lifestyle, log on to our website latestly.com).