As per new reports, Rashami Desai was asked to exit the show after the makers decided to slash Naagin 4's shooting budget. Since the actress was an expensive resource, they had to let her go. 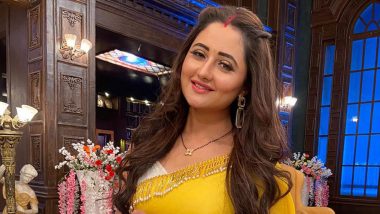 A piece of sad news is coming in for all Rashami Desai fans and we hope it's a mere rumour. As per new reports, Rashami Desai's character won't return in Naagin 4 once the shooting resumes after lockdown. Will Shalaka die or simply exit the show in some other way, we don't know but chances are you won't get to see your favourite actress in Ekta Kapoor's supernatural show ever again. And you know whom to put the blame on. Yes, the ongoing coronavirus pandemic. Naagin 4: Akanksha Puri Reveals That She Was Approached For Rashami Desai's Naagin 4 Role Shalaka (Deets Inside).

As per a report in SpotboyE, the actress was asked to exit the show after the makers decided to slash its shooting budget. A source close to the series gave an update to the portal by saying, "The channel held a meeting with the makers and cast recently, after which Rashami was told that her character of Shlakha will not be taken forward. The channel and the producers are wanting to bring the budget down as we know how crunched the market is as of now. And Rashami was an expensive resource. So, a mutual decision was taken to let go of her character. Decision on Nia Sharma and Vijayendra Kumeria is yet to be made." Well, that's certainly saddening for all Rashami fans but let's hope they find a way to retain her. COVID-19 Effect! Rashami Desai Gets Her Temperature Checked Before Entering Naagin 4 Sets (Watch Video).

When the portal tried reaching Rashami for her reaction on the same, she wasn't available. Her entry in the show as Shalaka was much appreciated and she had helped them bag some good TRP ratings. The decision to drop her sounds unfair but we can't blame anyone really. Production houses are struggling to keep things afloat while patiently waiting for the lockdown to end. Let's stay hopeful for that's the only thing we can do currently.

(The above story first appeared on LatestLY on May 23, 2020 09:27 PM IST. For more news and updates on politics, world, sports, entertainment and lifestyle, log on to our website latestly.com).