Shaktimaan Re-Telecast Schedule on Doordarshan: Here's When and Where You Can Watch This Mukesh Khanna's Superhero Show on TV

After Ramayan and Mahabharat, 90s superhero serial, Shaktimaan will rerun on Doordarshan once again. And just in case you are puzzled with where and when to watch it. Here's the answer. 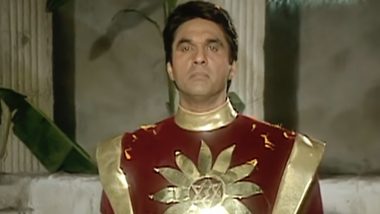 Seems like Doordarshan is giving a tough competition to all the OTT platforms amid the coronavirus outbreak. As after two epic mythological shows, Ramayan and Mahabharat, the channel is all set to rerun its 90s original superhero show, Shahtimaan back on TV. The same news was confirmed by ANI as well the lead actor of the show via Twitter. Just when the self-quarantined peeps were running out of content, DD National has blessed one and all with a cult classic. As all the daily soaps shoots have been called off amid the lockdown, there is a shortage of fresh content, and what a better treat than going down the memory lane. Ramayan Re-Telecast Schedule on Doordarshan: Here's When and Where You Can Watch The Arun Govil-Deepika Chikhalia-Sunil Lahri Mytho Show on TV.

When and Where Can You Watch The Show:

The channel's this move is indeed great considering the current scenario. Just in case you are puzzled with where and when to watch it. FYI, Shaktimaan will air 1-hour daily starting from April 1, 2020, at 1 PM noon on DD National network.  COVID-19 Lockdown: Ramanand Sagar's Ramayan and BR Chopra's Mahabharat To Re-Run On Television.

Doordarshan is all set to telecast Shaktimaan, the famous serial featuring Mukesh Khanna, for 1-hour daily on DD National network from April 2020 at 1 PM: Government of India

The leading actor of Shaktimaan had earlier confirmed the show's return news. He had made an official announcement about the comeback with a caption that read, “130 crore Indians will together get the opportunity to watch Shaktiman on DD once again. Wait for the announcement.”

130 crore Indians will together get the opportunity to watch Shaktiman on DD once again. Wait for the announcement. pic.twitter.com/MfhtvUZf5y

In the 90s, Shaktimaan ran from 13 September 1997 to 27 March 2005. Not only Mukesh Khanna (Pandit Gangadhar) was the lead in this TV show, he was also the producer of the same. Also, Kitu Gidwani (later replaced by Vaishnavi Mahant) played the love interest of Shaktimaan. So, are you excited to watch the show again? Tell us your thoughts in the comment section below.

(The above story first appeared on LatestLY on Mar 30, 2020 10:30 PM IST. For more news and updates on politics, world, sports, entertainment and lifestyle, log on to our website latestly.com).