Sharad Malhotra Opens Up About His Directorial Debut, Says ‘Making the Short Film Was Challenging but an Amazing Experience’

Sharad Malhotra's debut directorial Prem Gajra Aur Chilli Chicken recently released digitally, and he says making the short film was challenging but an amazing experience. Sharad recalls he was shooting for the show Kasam Tere Pyar Ki, when he started work on his film. 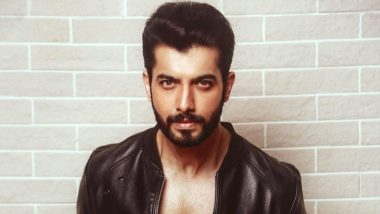 Actor Sharad Malhotra's debut directorial Prem Gajra Aur Chilli Chicken recently released digitally, and he says making the short film was challenging but an amazing experience. "When you do something new, it is never a smooth ride. But your efforts and prayers never go unanswered. We are getting so much love for the film that also gives out a strong message to society. Making the film has been a challenging, blissful and full-filling experience. It's my labour of love. I'm happy how it turned out," he told IANS. Sharad Malhotra: Money Is Secondary, Might Do Creative Work for Free.

Sharad recalls he was shooting for the show Kasam Tere Pyar Ki, when he started work on his film. "We were on a tight schedule but I somehow managed my time to work on this project. The moment the show got over, I started building my team. First, we formed a production team, and then I approached my close friend Prateek Chakravorty of Pramod Films," shares the actor. Bepanah Pyaar First Look Poster: Surbhi Chandna, Sharad Malhotra’s Music Video Will Be Out on March 24.

He added: "Prateek liked the concept and thought I would act in it. He was taken by surprise when I told him I want to direct it. But he was more than happy to fund my dream. He always pushes me to do my best. We both have immense trust in each other that has not changed over the years. He was like ‘you make the film, I'll take care of the rest'. He's always there for me."

A team of around 30 to 40 members worked for 32 hours to complete this 20-minute short feature. He recalls the day it suddenly started raining during an outdoor shoot. "I got worried and secretly prayed for a miracle to happen. The rain stopped for about 15 minutes, allowing us time to get what we wanted. Then there was another time when I wanted to shoot on a particular bridge in Powai but was told it'd take time to get permission. Everyone wanted me to change the location but I didn't want to compromise or lose hope, and we did get the permission after two days," he says.

(The above story first appeared on LatestLY on Apr 30, 2021 09:31 PM IST. For more news and updates on politics, world, sports, entertainment and lifestyle, log on to our website latestly.com).