Shilpa Shinde Quits Gangs of Filmistan, Says ‘I Don’t Want to Be a Part of a Show Where There’s No Self-Respect’ 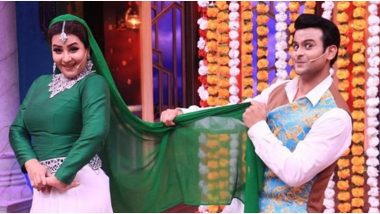 Television actress Shilpa Shinde once again made headlines after she had confirmed of making a comeback to the small screen post two years with comedy show titled Gangs of Filmistan. However, this good news was short-lived as recently Shinde accused the makers of the show of not following the guidelines, making actors work overtime and more. Well now, she has finally taken the decision to quit Gangs of Filmistan. In an interview with ETimes, she expressed that she has no intentions to return to the comedy show. Shilpa also cited her reason to say goodbye to the Sunil Grover show. Shilpa Shinde Alleges Gangs of Filmistan Makers of Making Actors Work Overtime, Not Following Safety Protocols and Sunil Grover of Taking Over Other Actors' Gags (Deets Inside).

"I had given my 200 percent, I had done a lot of hard work which obviously was not seen at all. But as I said earlier, I had no problems with the team, the star cast. They all have worked hard and they are the best actors to work with. So, I gave my best wishes to them through my social media post. I am not trying to be diplomatic here, I love all the actors whom I worked with on the show. But there is also the truth that I am very hurt after I saw the first episode and there is a bitter feeling now," Shilpa Shinde said to the portal.

Shinde also expressed how the show was just meant for Sunil Grover, "Till the time we were performing the scenes without Sunil ji we all were doing great, the moment he started doing gags, we got sidelined. I am working after a gap of two years, why will I try to spoil everything, but I want to say that I was getting exploited on the sets when it comes to acting." "After having an experience of so many years I am being used as a prop, is it justified?" she added.

"I am asking the channel, after giving this treatment to me and using my name for the promotion of the show, are you willing to call me back? I feel the makers have already got what they needed from me. I am not doing the show, I don't want to be a part of a show where I am not seen, where I don't have my self-respect, I don't want to do it," concluded Shilpa. All we wish is good for the actress and hope we see her on some or the other show soon. Stay tuned.

(The above story first appeared on LatestLY on Sep 01, 2020 09:36 AM IST. For more news and updates on politics, world, sports, entertainment and lifestyle, log on to our website latestly.com).