Singer Sona Mohapatra is "truly elated" to receive actress Tanushree Dutta's support in her protest against composer Anu Malik being reinstated as judge on Sony TVs Indian Idol Season 11. Last year, Malik was removed as Season 10 judge after Sona alleged that the composer had sexually harassed her. 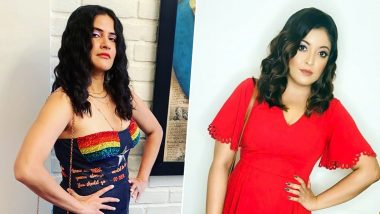 Singer Sona Mohapatra is "truly elated" to receive actress Tanushree Dutta's support in her protest against composer Anu Malik being reinstated as judge on Sony TVs Indian Idol Season 11. Last year, Malik was removed as Season 10 judge after Sona alleged that the composer had sexually harassed her. There were accusations against Malik by other singers such as Neha Bhasin, Shweta Pandit and Caralisa Monteiro, too. Sona Mohapatra Hits Back at Anu Malik’s Open Letter, Says ‘Go to a Sex-Rehab or Counselling to Know How to Behave Better’

Tanushree, who kickstarted the Me Too campaign in Bollywood in 2018, in a recent interview said that she wanted to "stand up, raise my hands up and applaud Sona Mohapatra" for her guts to speak up against Malik. Reacting to Tanushree's comment, Sona said: "I read Tanushree's interview and critique of Sony TV's double standards of claiming to be a family channel but platforming a multiple accused sexual predator like Anu Malik on Indian Idol this morning on my way back from a concert and I felt truly elated! Sona Mohapatra Questions Sachin Tendulkar for Supporting #MeToo Accused Anu Malik’s Reality Show Indian Idol 11

She was the first to speak up in #MeToo in Bollywood after the women in Kerala initiated the movement in India and she has been really brave in this fight for safer workplaces." "My own fight is not against just one man, but against an entire system that normalises sexual harassment and encourages perverted behaviour, power play and a lopsided system. I am not one to tire easily or run away from a battlefield and one odd fight might be lost but ultimately the war will be won," Sona added.

She sounded confident that Malik would be removed. "Anu Malik being removed from this show will be a symbolic victory for the people fighting for positive change, a better and safer future for children and women in India. This is no small, petty or minor issue, this is a matter that defines what kind of 'India Shining' we plan to be in the coming years. This is the 'good over evil' type of fight and celebration that we have every year on Durga Puja or Dussehra."

Earlier, complimenting Sona, Tanushree said in an interview to Mid Day: "I want to stand up, raise my hands up and applaud Sona Mohapatra along with others for fighting the good fight against Anu Malik's reinstatement in Indian Idol. What shocks me most in this ordeal is how Sony TV, which is supposed to be a family-friendly channel, has allowed such a person to remain a judge when several educated, talented, highly accomplished, intelligent, high profile women have come forward with their stories of harassment against him. I mean are TRP more important that our human values? Shouldn't people who misbehave be held accountable for their deeds? Why reinstate him at all after all those allegations surfaced?

The actress had added: "This seriously brings into question the mindset of the channel team as well as the creators and management of the show. This also puts serious doubts on the mindset of the co-judges who agreed to be a part of the show, especially Neha Kakkar, who is also a successful woman singer herself much like Sona, Neha Bhasin and Alisha Chennai. Also, why not celebrate brave, bold and dynamic women like Sona Mohapatra who fight the good fight despite losing jobs, peace of mind and health? These bravados should be promoted because the world will be a better place because of them."

According to Sona, the second wave of the Me Too movement has just started. "That Shweta Pandit, Neha Bhasin, Caralisa Monteiro and many other women including a journalist yesterday spoke up and shared their traumatic stories with Anu Malik, and others like Alisha Chinai, Abhay Deol and now Tanushree have supported our campaign to remove him as a judge, goes to say that the tide is turning. While it does take time, the good people of the world do rally together to fight evil and help change things for the larger good. #MeToo will not die that easily, the second wave is here & its #TimesUp now!" she said.

(The above story first appeared on LatestLY on Nov 18, 2019 08:37 PM IST. For more news and updates on politics, world, sports, entertainment and lifestyle, log on to our website latestly.com).