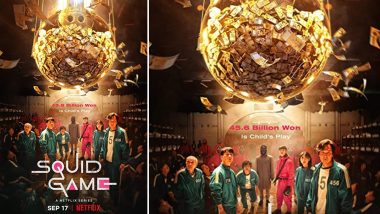 Squid Game revolves around the story of a group of people who risk their lives in a mysterious survival game. Created by Hwang Dong-hyuk, the poster, trailer, teaser of the series grabbed a lot of attention and so fans were eagerly waiting with bated breath for the series to release on Netflix. So, now its streaming on the OTT platform. Squid Game is streaming on Netflix and just in case you want to know all the details about the south korean drama, read on. No Time To Die Movie: Review, Cast, Plot, Trailer, Release Date – All You Need To Know About Daniel Craig’s Latest James Bond Film.

The Netflix's south korean drama is about hundreds of cash-strapped players, who accept a strange invitation to compete in children's games.  However inside, a tempting prize awaits with deadly high stakes. A survival game that has a whopping 40-million-dollar prize at stake.

Squid Game Release Date and Where To Watch Online

(The above story first appeared on LatestLY on Sep 28, 2021 09:00 PM IST. For more news and updates on politics, world, sports, entertainment and lifestyle, log on to our website latestly.com).