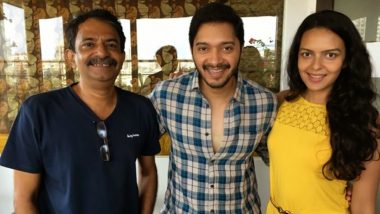 Lyricist Amitabh S. Verma, who has also directed short films as Hotel Park Street and Bhor, has helmed his first series Teen Do Paanch, starring Shreyas Talpade and Bidita Bag. The series tells a couple's story, about how their life changes after they adopt three kids. "I have always liked slice-of-life films that are in the real space and relatable. We have tried to make the series as real as possible. Actress Neelam Pathania Feels Healthy Competition in TV Industry Has Improved Quality of Shows.

This is a story my wife Shruti Anindita Vermaa, who is a known television producer and director, had written. We adapted that into a series and added a lot of elements. All these elements in the series have been taken from real life and I am sure many people are going to relate to it. Adoption is a serious theme but we have treated it in a light manner so that it doesn't become too heavy for the viewers," Verma told IANS. Lilly Singh’s Late-Night Show to End on NBC, Final Episode to Air on June 3.

He says working with Shreyas Talpade was a treat. "Working with Shreyas Talpade is a dream come true. I have always been a fan of his. He is not only a brilliant actor but also a great human being and now a friend for life. His humility is exemplary. Many a time, we had to shoot for more than 12 hours at a stretch because we had to finish the shoot within 25 days, but he never ever complained.

He was always ready with his costume and makeup and always on time. I don't think we have many actors who are as professional as him. It was a great experience working with him and I would love to work with him again," he says. Verma has a lot of work in the pipeline. "I am writing a feature film that will be shot in July if everything is okay. My wife is going to direct a feature film. Right now, I am also writing her film. A lot of documentaries and a superb travel series are in the pipeline. I am also casting for my next feature film. It is a comedy that I am sure will be loved by people," he declares.

(The above story first appeared on LatestLY on May 08, 2021 09:31 PM IST. For more news and updates on politics, world, sports, entertainment and lifestyle, log on to our website latestly.com).